The Awesome Power of Music! 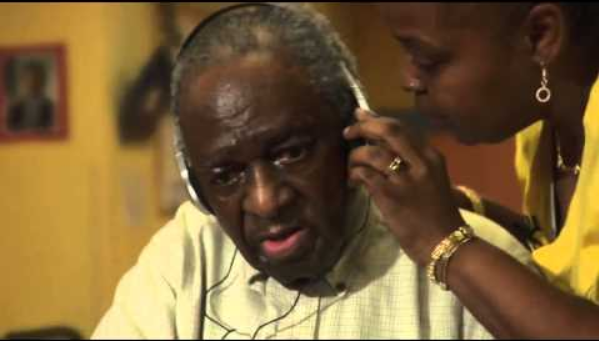 You want an idea of why we are more excited than ever about "When Swing
Was King," Vital Signs Ministries' outstanding outreach into nursing homes and senior centers?

Then, by all means, check out the clip and the article below. And then check in with "When Swing Was King."

Caring for patients with dementia will probably be one of the biggest human dignity issues of our century, as the proportion of elderly grows across the globe. It seems disgraceful to warehouse them in nursing homes, but often there are few alternatives.

So I was really delighted to see a ray of light in a new documentary, Alive Inside, which won the 2014 Sundance Film Festival Audience Award for an American documentary. It features the power of music to raise patients out of their torpor. Sometimes the effect of placing earphone and an iPod on an unresponsive patient slumped in a wheel is little short of miraculous…

Michael Rossato-Bennett, the director of the award-winning documentary, “Alive Inside,” says his life was transformed by making the film. “I hope it will bring the story of Dan’s work to the world and awaken hearts and minds to the healing power of music. Music has great lessons to teach us about what it means to be human. I learned that from the sweet and vulnerable souls I met making this film.

Through music, we have the power to help millions of people awaken to who they are and what they can be. Music gives us the ability to reach a population that might otherwise be unreachable. It allows us to touch hearts and ignite souls. Through music, we can help the old and the aging sustain their humanity and by doing so, inevitably, we’ll prove our own.”

Read more of the Mercator article by Michael Cook, “Bringing the elderly back to life with music.”
Posted by DH at 9:52 AM