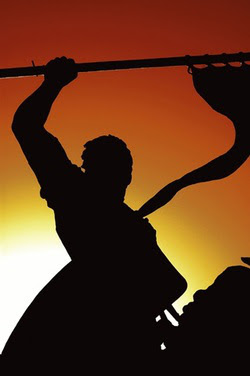 Banners in the Old Testament are military standards. They first appear in Numbers1:52 and 2:2 in the directions God gave to Moses for the arrangement of the Israelite camps in the wilderness. Those banners, specifically and publicly, identified the tribal armies to which each Israelite belonged. Thus the banner represented identity, strategic organization, purpose, and inspiration for battle. And it is these practical elements that provide the foundation for the metaphorical use of banner in later Old Testament Scriptures. Let’s take a few moments to consider these four elements.

1) Identity. The soldier finds fellowship, accountability, and stimulation to strive harder by being part of a solid corps of soldiers. Therefore, the corps flag, as a visual symbol of all its values, is deeply cherished and carefully protected. Psalm 20:5 emphasizes the blessing of identifying with God in His victories by erecting banners. “We will sing for joy over Your victory and, in the name of our God, we will set up our banners.” A similar expression is seen in the exultation over Zion’s new and forever glory in Isaiah 62:10. “Build up the highway, remove the stones, lift up a standard over the peoples.”

But the banner isn’t only displayed after the victory. No, it is also unfurled preliminary to and during the battle itself. Indeed, the banner of God can serve as a prophetic announcement of His holy, conquering purpose. Babylon, for instance, is warned in Isaiah 13:2 and 3, “Lift up a standard on the bare hill… I have even called My mighty warriors, My proudly exulting ones to execute My anger.” Ethiopia and the other nations are also warned of judgment by the appearance of the Lord’s banner in Isaiah 18:3. “All you inhabitants of the world and dwellers on the earth, as soon as a standard is raised on the mountains, you will see it.”

2) Organization. Throughout history, military commanders have used the various banners of their armies to help conduct strategic movement during a battle. Though a being a whole and unified army, it is composed of different parts and the skillful coordination of their action is critical to success. The individuals within the corps do not necessarily need to know the overall battle plan, they simply need to stay close to their standard and obey their orders.

3) Purpose. In some cases, the military banners of an army represented specialized talents, training, or tasks. For example, an infantry corps played a different role in battle than did pikemen or archers or cavalry. In the same way, the Lord often gives Christians different banners to carry, banners that signify their unique callings and spiritual gifts. Nevertheless, they serve in a common cause, under a common Commander, anticipating a common inheritance.

4) Inspiration. Bonds forged by love and trust and shared ideals are tremendously strong. And those bonds yield courageous, sacrificial devotion. Historical examples abound of the honor involved in carrying the flag in battle. One standard-bearer falls but another picks it up and moves forward. Through the cries and confusion, the smoke and shells, the flag continues to wave, inspiring and guiding soldiers in their advance.

All four of these elements are relevant in the “banner verse” that’s been on my mind lately. It is Psalm 60:4. “You have given a banner to those who fear You that it may be displayed because of the truth.” As a believer, one who fears God with proper reverence and love, I am fully identified with Him…and He with me. Scripture teaches that because I have trusted in Christ as my Savior, I am one of His beloved disciples. And that service carries the responsibility of being a bondservant, a faithful witness, a dedicated soldier. And especially applicable to these tasks is His gift to me of a holy banner -- a banner which needs to be publicly displayed.

My identity isn’t static or platonic, it involves function. I am a standard-bearer, responsible to show forth in the public square (as well, of course, in my private life) His truths concerning righteousness, justice, and the offer of grace through the atoning work of Jesus. I must bear this banner for others to see and do so boldly, consistently, gratefully, and joyfully.

God is working out his will in history. And, amazingly, I am honored to be a part of that. In the spiritual rebirth that comes through receiving Christ, God has not only forgiven my debt of sin, He has redeemed me, transformed me, and (through the indwelling of the Holy Spirit), equipped me for every good work…including bearing His banner in my corner of the battlefield.  All the banners of the Lord display His character and the glorious truth He offers to men. Like the lights we are given that are not to be hidden under a basket, the banners we are given or not to be stowed away in the trunk of our car to be unloaded only when we attend church. No, the Lord’s banners are for public display. Therefore, if we fail to raise His standard, we are living in flat out disobedience.

“You have given a banner to those who fear You that it may be displayed because of the truth.” So don’t neglect your high calling. Bravely bear His banner.
Posted by DH at 5:06 PM

“The Only History That Is Worth a Tinker's Damn” 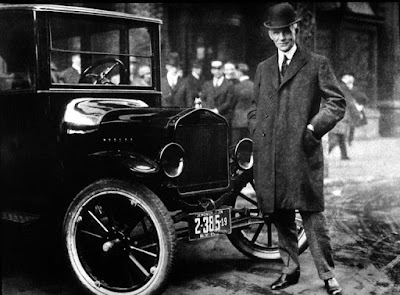 Of course, the only portion of that quote which has gone down in...uh, history, is the first line. But it is actually the last line that is the most relevant to modern culture.

Indeed, it's pretty obvious that the cultural powers that be (politics, academia, Hollywood) are determined to escape what they believe are the shackles of the past. They are progressives through and through who believe that civilization is like detergent or breakfast cereal -- only the “new and improved” brands should be allowed on the shelves. Everything else should go to the trash bin.

Therefore, the virtues of Western culture, no matter how beautiful, ennobling or indispensable for a society's health (think of the U.S. Constitution, Christianity, marriage, family, etc.) are ignored if not mocked and vilified.

Yes, the words are Henry Ford's. But the sentiment is alive and well in the hearts of today's progressives.
Posted by DH at 5:27 AM

Os Guinness on the Reformation, Covenants, and Passing On the Torch 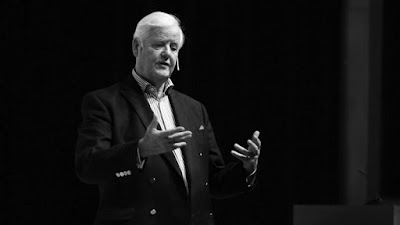 A couple of weeks ago I very much enjoyed watching the Trinity Forum’s presentation of Os Guinness speaking on the Reformation's ideals and effects. His talk (and the response to it by Joseph Loconte) was remarkably cogent, enlightening, and corrective. Indeed, I can't thank Trinity Forum enough nor can I recommend the presentation more highly.

Below I embed the entire video from the Trinity Forum website knowing that it takes time to listen carefully to the talk…but knowing also that it is well worth it.

Words to Live By (From Billy Sunday and Fr. Edward Flanagan)

Last month I gave my talk, “Piety on the Plains: A Religious History of Omaha,” to audiences at 5 different senior citizen facilities with nearly 120 people involved. It was, we are delighted to report, very well received. And Claire and I had a great time following up with wonderful visits with the residents afterwards.

The talk covers a lot of ground – the earliest missionary activity in the area, church beginnings, the impact of such groups as the Sisters of Mercy and the Immanuel Deaconess Institute, Christian radio, notable events and persons, and much more.  And since that review included the 6-week revival crusade in 1915 led by baseball player/evangelist Billy Sunday as well as the founding of Boys Town by Fr. Edward Flanagan, we handed out a double-sided sheet of quotations from those two leaders.  We thought you might find those quotations of value too so…here they are. 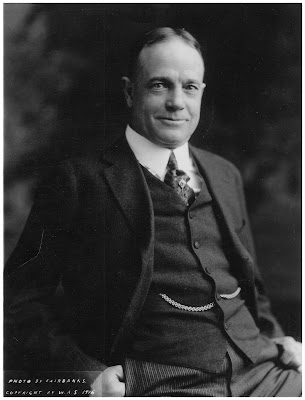 “The trouble with many men is that they have got just enough religion to make them miserable. If there is not joy in religion, you have got a leak in your religion.”

“Some homes need a hickory switch a good deal more than they do a piano.”

“If there is no hell, a good many preachers are obtaining money under false pretenses.”

“Hypocrites in the Church? Yes, and in the lodge and at the home. Don't hunt through the Church for a hypocrite. Go home and look in the mirror. Hypocrites? Yes. See that you make the number one less.”

“I believe that a long step toward public morality will have been taken when sins are called by their right names.”

“Going to church doesn't make you a Christian any more than going to a garage makes you an automobile.”

“Temptation is the devil looking through the keyhole. Yielding is opening the door and inviting him in.”

“I believe the Bible is the word of God from cover to cover.”

“God likes a little humor, as is evidence by the fact that he made the monkeys, the parrot -- and some of you people.”

“Some persons think that they have to look like a hedgehog to be pious.”

“The inconsistency is not in the Bible, but in your life.”

“If you live wrong you can't die right.”

“Churches don't need new members half so much as they need the old bunch made over.”

“Try praising your wife, even if it does frighten her at first.”

“When I hit the devil square in the face some people go away as mad as if I had slapped them in the mouth.”

“To train a boy in the way he should go you must go that way yourself.”

“It is not necessary to be in a big place to do big things.”

“Yank some of the groans out of your prayers, and shove in some shouts.”

“The Bible will always be full of things you cannot understand, as long as you will not live according to those you can understand.” 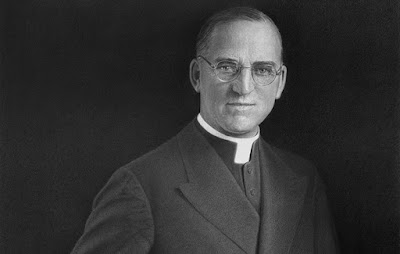 And from Fr. Flanagan…

“The work will continue, you see, whether I am there or not, because it is God’s work, not mine.”

“When parents fail to do their job, when they allow their children to run the streets and keep bad company, when they fail to provide them with good examples in the home, then the parents, and not the children, are delinquent.”

“Without God at the beginning, there can be only confusion at the end.”

“A true religious training for children is most essential if we are to expect to develop them into good men and good women — worthy citizens of our great country.”

“No race that does not take care of its young can hope to survive — or deserves to survive.”

“Our country needs good men and good women who have learned to love God above all things, and their fellow man for the love of God.”
Posted by DH at 10:11 AM