I Received a Letter Today from President Obama 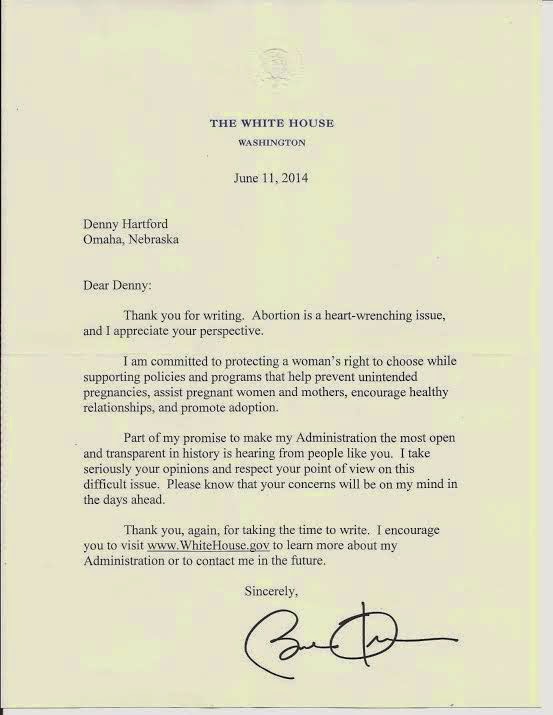 Yes, of course, it was just a form letter but, after writing several letters to the White House in recent years, it was the first time there was ever a response. Thank you, Mr. President.

However, I must point out a few ironic elements in your note.

1) You say "abortion is a heart-wrenching issue." Why do you think that? Is it because, no matter what slogans or hype or convoluted justifications are used, everyone realizes that abortion kills a human child? Indeed, Mr. President, abortion is not merely a heart-wrenching matter, it is a violent, blasphemous heart-destroying act. And, though you claim such things are above your pay grade, you know this quite certainly.

2) You remind me that you are "committed to protecting a woman's right to choose." That is hardly arguable, is it? Your record on abortion -- not just protecting it, but promoting it, defending it, glorifying it, and financing it -- is the most extreme in political history. Yet, once again, this proud statement of yours lacks honesty and intellectual value. A woman's right to choose...what? The tearing apart of her child by a suction machine? The barbaric dissection of her baby by sharp curettes? The cold-hearted corrosives of saline and other poisons that bring a torturous death to the developing baby?

You are committed to that?

3) Your letter goes on to make claims about preventing unintended pregnancies, helping moms and kids, and so on. But really, Mr. President, do you really expect the public to buy that, especially those who are aware of your intense partnership with Planned Parenthood, the nation's mega-abortion corporation that also excels in promoting (and enabling) sexual promiscuity? No, Mr. President, that's not going to fly.

4) And finally, the reminder of your promise regarding your administration's transparency is a particularly weak part of your note. For it's awfully hard to forget the seemingly innumerable scandals which, in fact, emphasize just the opposite. On one hand, there's your insistence about transparency. But, on the other hand, there's the matters of NSA, IRS, Benghazi, Fast & Furious, secret White House logs, talking points that deny clear truths, stonewalling, dissembling, distraction, blaming, lost e-mails, the epidemic of forgetfulness when officials are questioned by Congress or the press, repression of press access, revisionist history, and more.

Mr. President, I do indeed thank you for your letter. But, I'm afraid, I found it quite unsatisfactory. Therefore, I will continue to pray for you (as I regularly do), asking God to bless and protect you, to give you wisdom and guidance, but also to awaken your conscience to your part in the appalling destruction of prenatal life that is occurring in our era.