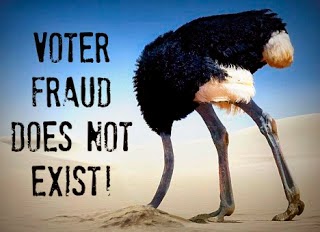 Last week Al Sharpton embraced convicted vote fraudster Melowese Richardson at a “voting rights” rally in Cincinnati.  The United States Department of Justice under Eric Holder has done nothing to Melowese Richardson 410 days after she admitted on camera that she committed multiple federal felonies by voting six times for President Obama’s reelection.

Federal law makes it a felony to vote more than once for President.  In fact, 42 U.S.C. Section 1973i(e) subjects Richardson to twenty-five years in federal prison for her six votes for Obama.

The lack of DOJ action against an unrepentant federal vote fraudster combined with Richardson’s lionization by Sharpton and the organization that sponsored the rally demonstrates how the Justice Department is facilitating a culture of brazen criminality on the eve of the 2014 midterm elections.  The failure to indict Richardson is the latest example of Holder’s department excusing lawlessness in federal elections and abandoning law abiding Americans…

Read on. (“No Justice Department Charges Against Ohio Woman Who Voted Six Times for Obama” by J. Christain Adams over at Breitbart.)
Posted by DH at 11:10 AM