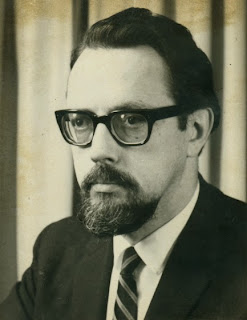 Since I do not believe pacifism has a biblical foundation, I've never paid much attention to John Howard Yoder, the Mennonite academician whose name I often see associated with modern pacifism and whose name is used so frequently by evangelicals attracted to political and social liberalism.

Therefore, I was unaware of Yoder's bizarre attempts to fold extramarital sexual activities into his theological construct until I read a recent New York Times article, "A Theologian’s Influence, and Stained Past, Live On," by Mark Oppenheimer. I now understand that quite a few folks (at least within Mennonite circles) know of Yoder's history of aberrant behavior but nevertheless downplay it, deny that it detracts from his theological work, or even ignore it altogether.

But personal morality cannot be separated from Christian theology, a fact that even a secular reporter understands.

Can a bad person be a good theologian?

All of us fall short of our ideals, of course. But there is a common-sense expectation that religious professionals should try to behave as they counsel others to behave. They may not be perfect, but they should not be louts or jerks.

By that standard, few have failed as egregiously as John Howard Yoder, America’s most influential pacifist theologian. In his teaching at Notre Dame and elsewhere, and in books like “The Politics of Jesus,” published in 1972, Mr. Yoder, a Mennonite Christian, helped thousands formulate their opposition to violence. Yet, as he admitted before his death in 1997, he groped many women or pressured them to have physical contact, although never sexual intercourse...

In 1992, after eight women pressured the church to take action, Mr. Yoder’s ministerial credentials were suspended and he was ordered into church-supervised rehabilitation. It soon emerged that Mr. Yoder’s 1984 departure from what is now called Anabaptist Mennonite Biblical Seminary, in Elkhart, Ind., had also been precipitated by allegations against him. He left for Notre Dame, where administrators were not told what had happened at his last job...

Mr. Yoder seemed very attentive to the notion that theology should align with behavior. It turns out that in unpublished papers, he formulated a bizarre justification of extramarital sexual contact.

In his memoir, Professor Hauerwas alludes to what Tom Price, a reporter for the newspaper The Elkhart Truth, described in a five-part 1992 series as Mr. Yoder’s defense of “nongenital affective relationships.” Mr. Yoder said that touching a woman could be an act of “familial” love, in which a man helped to heal a traumatized “sister.”

Ms. Heggen, called Tina in the newspaper articles, told Mr. Price that Mr. Yoder had a grandiose explanation for his advances, which he tried out on multiple women. “We are on the cutting edge,” Mr. Yoder would say, according to Ms. Heggen. “We are developing new models for the church. We are part of this grand, noble experiment. The Christian church will be indebted to us for years to come.”…

After his advance toward her, Mr. Yoder mailed Ms. Heggen an essay in which he advocated physical contact, including nudity, between unmarried people, so long as “there wasn’t lust.”

Ms. Heggen had a theory of what Mr. Yoder might have been thinking. “ ‘I have created this great peace theology,’ ” she began, trying to put his thoughts into words. “ ‘And you and I are developing a new Christian theology of sexuality.’ ”
Posted by DH at 12:58 PM