Yes, Virginia. The Crisis Is the Democrats' Fault. 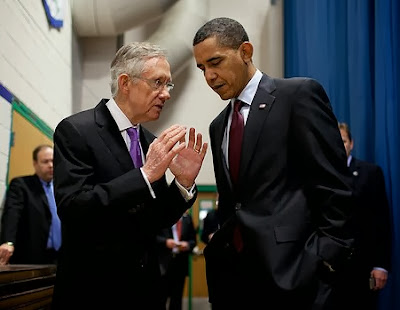 Here’s a simple question: Why are we currently funding the federal government through a series of short-term measures known as “continuing resolutions”? The answer is that the budgeting process has completely broken down in recent years, and the two men most responsible for that breakdown are President Obama and Senate Majority Leader Harry Reid.

For three consecutive years — 2010, 2011, and 2012 — the Democrat-controlled Senate did not pass a budget bill because Reid knew that it would be a political liability to do so. Passing a budget that detailed the Democrats’ plans for spending and revenue as official policy would have exposed the “something for nothing” swindle that Reid and his colleagues are perpetrating on the American people…

Reid and the Democrats knew this. They knew very well that the federal deficit was spiraling out of control, that there was not enough tax revenue to pay the mushrooming cost of entitlement programs (Medicare, Medicaid, food stamps, unemployment, et cetera), and certainly there wasn’t enough revenue to pay for all the boondoggles and giveaways the Democrats voted for in the name of “stimulus.”

Adding to this, there was not enough revenue to pay the cost of Obamacare, which Democrats rammed through Congress in March 2010 on a party-line vote. Passing an actual budget would have made clear the unsustainable fiscal nightmare into which Democrat policies have plunged the nation during the Obama Age, and so Harry Reid simply didn’t pass a budget for three years…

Read the rest of "Extremely Extreme Extremists" by Robert Stacy McCain at American Spectator.
Posted by DH at 9:06 AM