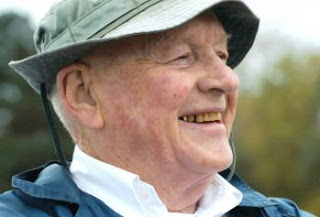 A friend from church who receives The Leavenworth Exchange (a neighborhood association newsletter) sent me a copy this weekend because it had a moving memorial about Chet Thomas, our dear colleague whose funeral I conducted last month.

I thought I'd print that article here not only for those of you who knew Chet (and that's a lot of you), but also as a general encouragement that living for Christ in the active, principled, and winsome ways that Chet did makes a big impact on the people around you.

The memorial is written by the editor of the newsletter, Jim Thompson.

When it came to politics and religion, one would have to be careful when opening a conversation with Chet. If you were a Republican, you got Chet's vote. And when he would proclaim "God bless you" at least once, if not more, during the conversation, he truly meant it.

Unfortunately I learned more about Chester Thomas, Jr. at his memorial service than all the years when we would talk and visit about the neighborhood. And that sums up the value this man had - it was not about him. He would, without fail, always ask about the family, or how I was doing. He always brought a cheerful note to the talk, even when it was about some negative aspect of the neighborhood that needed fixing. Like most of the neighbors, he had a busy schedule and we would only see him attend an occasional meeting. But he cared and always sent in his dues.

Along with the Audubon Society, Fontanelle Forest, Vital Signs Ministries and, in 1964, a delegate for Barry Goldwater, I feel good that he took the time to be part of the LNA. Right now, he's probably saying, "Stop writing about me." Dear Chet: you, your sense of humor, your concern for mankind, will be missed. May you rest in peace.
Posted by DH at 8:59 AM