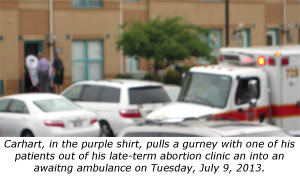 Operation Rescue reports on yet another woman endangered by late-term abortionist Leroy Carhart.

...A local activist caught LeRoy Carhart on video wheeling the injured woman out of the abortion clinic and into an awaiting ambulance. That video, published by Operation Rescue, prompted coverage by national news outlets, including Fox News.

It appeared that the abortion clinic worker that placed the 911 call, who identified herself as “Ashley,” attempted to minimize the patient’s injuries by evading a question about the seriousness of the bleeding.

“Uh, we have it under control but it’s a little more than the doctor would like,” the caller said.

“That response was completely contradictory and never directly answered the dispatcher’s question,” said Troy Newman, President of Operation Rescue. “If the bleeding was under control, why did the woman require emergency medical intervention and transport? This kind of obfuscation can cause a delay in necessary emergency treatment since the responders are not given an accurate picture of the patient’s true condition. The danger is compounded by the fact that Carhart has no hospital privileges whatsoever.”

This is the second known serious abortion complication suffered by Carhart patients this year. On February 7, Jennifer Morbelli died from complications to a 33-week abortion. Carhart had left town and could not be reached by family or emergency room physicians when her condition deteriorated. This left hospital staff in the dark about her condition and previous treatment, which delayed their ability to treat her...
Posted by DH at 9:10 AM