Phil Mickelson Wins One for the Ages (and The Taxman!) 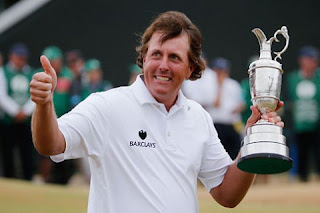 Golf superstar Phil Mickelson played one of the most impressive final rounds of all time to win the British Open last Sunday at the Scottish course of Muirfield, just a week after he had won the Scottish Open at Castle Stuart. And along with the joy, the sense of achievement, and the increase in career status from these two wins, Phil also will take home the combined prize money of $2,167,500.

For, in the modern era of the Nanny State, what one earns isn't even close to what one is allowed to keep.

But that’s not all. The UK will tax a portion of his endorsement income for the two weeks he was in Scotland. It will also tax any bonuses he receives for winning these tournaments as well as a portion of the ranking bonuses he will receive at the end of the year, all at 45%. It is a significant amount for Mickelson, with only Roger Federer and Tiger Woods earning more among athletes from endorsements and appearances. Mickelson ranked No. 7 overall with $48.7 million in Forbes’ June list of the world’s highest-paid athletes.

The UK is one of few countries that collects taxes on endorsement income for non-resident athletes that compete in Britain (the US also does). The rule has kept track star Usain Bolt from competing in Great Britain since 2009, outside of the 2012 Summer Olympics when the tax was suspended as a condition for hosting the Games. Spain’s Rafael Nadal has also allowed UK tax policy to dictate his tennis playing schedule.

The good news for Mickelson is that he can take a foreign tax credit on his US return so he is not double-taxed at the federal level on this income. The bad news is that the credit does not cover self-employment taxes (2.9%) or the new Medicare surtax (0.9%). Additionally, California does not have a foreign tax credit so he will have to fork out 13.3% there as well. Although he receives federal deductions for his California tax and half of his self-employment tax, these deductions do not benefit him on this income because as they reduce his federal tax they reduce his foreign tax credit.

Without considering expenses, Mickelson will pay 61.12% taxes on his winnings, bringing his net take-home winnings to about $842,700. When expenses are considered (10% to caddy Jim “Bones” Mackay, airfare, hotel, meals, agent fees on endorsement income/bonuses—all tax deductible here and in the UK), his take-home will fall closer to 30%...

Do you think Phil might be playing this song on his way home?