Okay, Bail Out Detroit. And Then What? 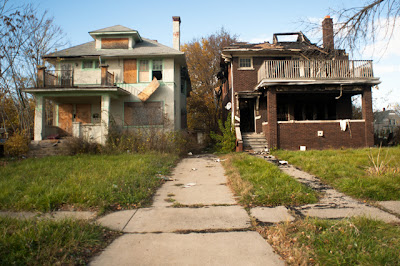 From today's Morning Jolt, Jim Geraghty's e-mail update that I've encouraged you to sign up for (several times, in fact -- go to National Review for the info), comes these musings on the idea being wafted around about a federal bailout of Detroit.

Let's assume the federal government didn't have $16 trillion in debt and had an extra $18 billion lying around. Assume that the whole country had a bipartisan spirit of generosity, eager to help out a city that had, for years, gone to a domed stadium on Thanksgiving Day to watch their football team lose to some visiting team.

Once Washington writes a check to Detroit to cover the city's $18 billion in debt . . . then what? You still have the same moribund economy, the same 78,000 abandoned structures, the same two-thirds of ambulances not in service, the same failing schools, the same shrinking population, the same shameful police response time, the same terrifying violent-crime rate, the same 40 percent of street lights not working . . . and likely, the same failed leaders, with the same failed philosophies and viewpoints that got the city in this mess in the first place. Conservatives outside the city like to point to it as decades of liberal policies run amok, but let's be fair: They can't even get liberalism right. Nearly half of the owners of Detroit's 305,000 properties failed to pay their tax bills in 2011.

It's the trifecta of liberal policies and incompetence and corruption that set up the city as a vortex of urban failure so intolerable that almost anyone who could afford to leave did.
Posted by DH at 10:09 AM