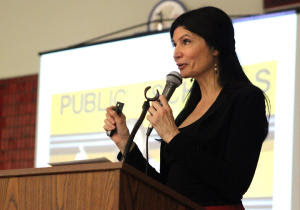 Lily Eskelsen Garcia, the Vice-President of the NEA, an organization widely known for its antagonism to Christianity, nevertheless makes her claim to divine revelation on matters of eternal judgment.

Of the NRA and others who promote the 2nd Amendment, Ms. Garcia flatly decrees, "I'm not an ordained minister, I'm not a theologian, but these guys are going to hell.”

The comment was made at the annual Netroots Nation conference last week.

Ms. Garcia's foreknowledge was not the only religious element in her speech. She also managed to channel the spirits of both Saul Alinsky and Barack Obama.

"We have to make those senators as frightened of us as they are of the gun lobby. Shame on us if we give one inch to the gun lobby. They got where they are because they never give up. Now the movement is us; we are the ones we were waiting for.”
Posted by DH at 8:30 AM