Surprise! The New Forward Is Backward. 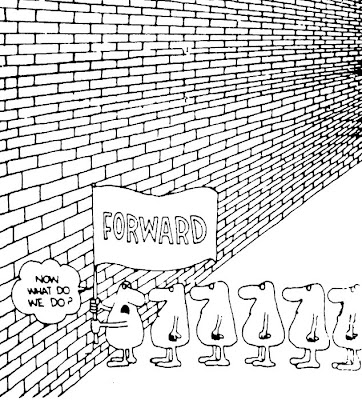 We're constantly reminded that America is evolving towards something higher and better and more hep. The nation is, after all, led by an elite group (politicians, judges and academics) whose favorite names for themselves are "progressive" and "enlightened," whose motto is "forward," and whose chief leader vows to "fundamentally transform society."

But realists cannot help to see things quite differently. They see, for instance, the American economy in shambles, an inevitable condition when productivity is punished (if not outlawed altogether) whereas waste, laziness, incompetence, and greed for the earnings of others are rewarded.

Realists also understand that the erosion of the sanctity of life ethic, the denial of human exceptionalism, the determined opposition to natural marriage and sexual morality, and the determined attacks on Christianity are signs of a radical de-volution of culture -- not vice versa.

And then there are the stories just from today's headlines. Are they indications of progress, of culture going forward?

* The "progressive" majority of the Supreme Court has ruled that the federal government must give the same benefits to homosexual couples as it gives to married persons.

* "Hundreds of jeering protesters helped stop Texas lawmakers from passing one of the toughest abortion measures in the country, shouting down Senate Republicans and forcing them to miss a midnight deadline to pass the bill."

* The Pentagon on Tuesday toasted gays in the military, with a top adviser to President Obama declaring the country is “safer” now that they may serve openly in the ranks. “Because we repealed ‘don’t ask, don’t tell,’ our military … is stronger and our country is safer, more equal and more just,” said Valerie Jarrett, the keynote speaker at the Pentagon’s gay pride celebration.