Is America Going the Way of Greece & Rome? 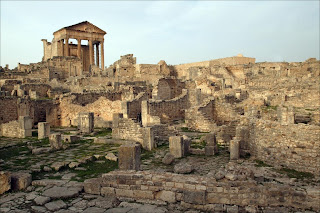 From Victor Davis Hanson's article, "Why Do Societies Give Up?" posted at Right Wing News.

...One recurring theme seems consistent in Athenian literature on the eve of the city’s takeover by Macedon: social squabbling over slicing up a shrinking pie. Athenian speeches from that era make frequent reference to lawsuits over property and inheritance, evading taxes, and fudging eligibility for the dole. After the end of the Roman Republic, reactionary Latin literature — from the likes of Juvenal, Petronius, Suetonius, Tacitus — pointed to “bread and circuses,” as well as excessive wealth, corruption and top-heavy government.

For Gibbon and later French scholars, “Byzantine” became a pejorative description of a top-heavy Greek bureaucracy that could not tax enough vanishing producers to sustain a growing number of bureaucrats. In antiquity, inflating the currency by turning out cheap bronze coins was often the favored way to pay off public debts, while the law became fluid to address popular demands rather than to protect time-honored justice...

By any historical marker, the future of Americans has never been brighter. The United States has it all: undreamed new finds of natural gas and oil, the world’s pre-eminent food production, continual technological wizardly, strong demographic growth, a superb military and constitutional stability.

Yet we don’t talk confidently about capitalizing and expanding on our natural and inherited wealth. Instead, Americans bicker over entitlement spoils as the nation continues to pile up trillion-dollar-plus deficits. Enforced equality rather than liberty is the new national creed. The medicine of cutting back on government goodies seems far worse than the disease of borrowing trillions from the unborn to pay for them...

History has shown that a government’s redistribution of shrinking wealth, in preference to a private sector’s creation of new sources of it, can prove more destructive than even the most deadly enemy.