Gay Victory: The Significance of Stonewall in the President's Speech 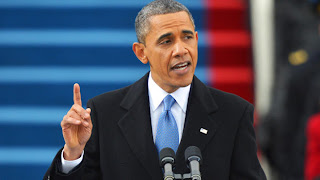 Barack Obama's inauguration speech certainly revealed that the national disaster which was his first term wasn't going to deter him a bit from pressing even harder to implement the most extreme ideals of his post-Christian liberalism. The forced redistribution of wealth? It was there. Dismantling our national security structure to make us more like other countries in the world? It was there. Scaling back the freedoms guaranteed by the Constitution to individuals and states? It was there.

And also there in his speech (even in the prayer that followed it) was his insistence that sexual behavior that the Bible refers to as unnatural and an abomination, extremely dangerous sexual behavior that has been condemned by Western civilization for millennia, will from now on be protected, praised and promoted.

Michael Brown's latest column in Charisma magazine provides insightful commentary on the implications of the President's speech. Brown is the host of the nationally syndicated talk radio show "The Line of Fire" on the Salem Radio Network and the author of several books, including A Queer Thing Happened to America.

Here are some excerpts from that column:

The president declared it. A pastor prayed it. And woe betide those who differ with this new reality announced at yesterday’s presidential inauguration: Gay is now an official social category as defined and tangible as black or white. Put another way, romantic attraction and sexual desire are now viewed as being as innate and immutable as skin color.

Make no mistake about it. Another significant step was taken yesterday at the inauguration, and what was once associated with the extremist views of radical gay activists is now as American as apple pie...

Earlier in the festivities, and framing his speech in historic, Constitutional terms, President Obama said, “We, the people, declare today that the most evident of truths—that all of us are created equal—is the star that guides us still; just as it guided our forebears through Seneca Falls, and Selma, and Stonewall . . . .”

So, the president spoke of Seneca Falls, Selma, and Stonewall in the same breath, and in front of the whole nation at his inauguration, thereby equating women’s rights, black civil rights, and “gay rights” – which include bisexual, transgender, and other categories as well – also putting the women of Seneca Falls, the blacks of Selma, and the drag queens of Stonewall in the same category.

Do we realize just how significant this is? Do we grasp the implications?…

To repeat my opening comments: woe betide those who differ with this new reality announced at yesterday’s presidential inauguration. The war is on against people of conscience and people of faith who do not affirm homosexual practice, no matter how loving and fair-minded they may be...
Posted by DH at 10:37 AM