Amid the Democrats' Economic Disaster, Nebraska Gov. Is Trying to Move Forward 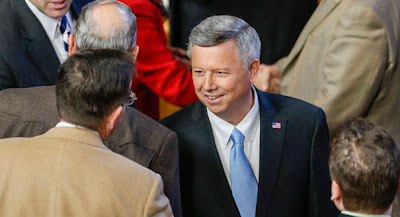 On top of his announcements last week to seek the elimination of corporate income taxes on individuals and corporations, to end the tax on all retirement income. and to make up for that revenue by ending a lot of sales tax exemptions -- as well as attracting new citizens and businesses, Nebraska Governor Dave Heineman has made another significant move towards proving that sound conservative policies are the real "forward" for America.

Nebraska Gov. Dave Heineman notified the Obama administration Tuesday that he has approved the controversial Keystone XL Pipeline to traverse his state, marking a significant step toward reviving the project after President Obama and Secretary of State Hillary Clinton sidelined it.

The Republican governor approved a revised route for the Canada-to-Texas pipeline which his office said would avoid environmentally sensitive areas.

"Construction and operation of the proposed Keystone XL Pipeline, with the mitigation and commitments from Keystone would have minimal environmental impacts in Nebraska," he wrote in a letter to Obama and Clinton.

The decision on final approval now rests with the Obama administration. The State Department is expected to decide within the next several months whether to permit the project to go forward -- Heineman's approval puts Obama in a difficult political spot...
Posted by DH at 9:51 AM