South Africa: The "Rainbow Nation" It's Not 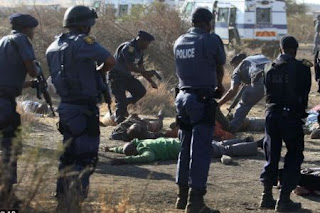 There have been very few mainstream news sources that have dared to examine the lethal violence (34 dead) used on August 16th against striking black miners by South African security forces.

When the South African apartheid government killed striking black miners at Sharpeville in 1960, the world certainly took notice. South Africa was vilified by the international community. It was condemned by American and European papers, blasted by the United Nations, excluded from the Olympics.  Indeed, Sharpeville has since become a key event in the political lore of the country, endlessly talked about as an example of the ruthlessness and injustice of apartheid policies.

But is the injustice any less when striking black workers are killed by forces representing a government led by the African National Congress?

Brendan O’Neill over at spiked! is one of those willing to look at what happened -- and to ask why there has been such a dearth of news coverage and commentary. He believes it is due almost exclusively to the Left's unwillingness to "explode the myth of a post-Apartheid rainbow nation."

Below are a couple of excerpts of O'Neill's "Massacre of the Miners: The ANC’s Sharpeville."

In Western newspapers, thundering editorials have been notable by their absence. No world leaders have issued withering condemnations of the government in South Africa, as they would have done in a flash if something like this had happened in Russia or China. Amnesty made a half-hearted statement (‘a judge must oversee an investigation into the deaths’) and then went back to organising global protests for the release of Pussy Riot. Even in South Africa itself, there is reluctance to talk frankly about the killings. In the words of one SA observer, ‘The most striking thing about the reaction is the lack of it’. Many people refer to the massacre as a ‘tragedy’, as if it were an accident at a mine rather than an act of state terror at a mine, or simply as an ‘incident’, that catch-all word that can cover everything from a scuffle on a bus to, it seems, the killing in three minutes flat of 34 people.

Why the caginess about discussing this major event? It is because the massacre did not only kill 34 miners – it also killed, or rather threatens to kill, the myth of a post-Apartheid ‘rainbow nation’. The massacre throws into sharp relief the nature of post-Apartheid South Africa and the bald, uncomfortable fact that while it may have done away with the overt racism of the old regime, it has kept in place the economic system that the old regime nurtured and the extreme exploitation of black workers that it was underwritten by. Having held up the so-called ‘rainbow nation’ of post-Apartheid South Africa as a shining example of how only negotiated political settlements can bring peace and only multiculturalism can ensure justice, observers around the world are made supremely uncomfortable by these recent events…

The massacre has been described by some as the fault of the workers themselves, including by many on the South African left. A leading member of the South African Communist Party (SACP) laid the blame at the feet of AMCU, accusing it of nurturing ‘chaos and anarchy’. Another SACP spokesman said: ‘The police used their weapons in exactly the way they were supposed to. The people they shot didn’t look like workers to me.’ In an official statement, the SACP called upon the South African president, Jacob Zuma of the African National Congress (ANC), to hold an inquiry into ‘the incident’ – not into the police’s brutality but into the ‘pattern of violence associated with the pseudo-trade union AMCU’…

But what the massacre of the miners brings to the fore is not simply the co-option of one miners’ union into officialdom’s camp, but rather the more historic, drawn-out process of the New South Africa’s cultivation of a new clique of black rulers to maintain the economic system that pertained under Apartheid. The massacre has made explicit what has hitherto remained largely hidden by the PC terms that abound in the New South Africa, from its description of itself as a ‘rainbow nation’ to its promotion of the values of ‘truth and reconciliation’ – which is that the ANC made a fatal compromise with the old regime in the late 1980s and early 1990s, agreeing to call off its struggle in return for its coming to power in a ‘New South Africa’ in which Apartheid laws would be dismantled but the vast economic inequalities between whites and blacks would largely remain. The Marikana massacre demonstrates the extent to which the ANC has replaced the Apartheid rulers as the overseers of a system of privilege for some (not just whites but some blacks, too) and hardship for vastly more...
Posted by DH at 12:50 PM