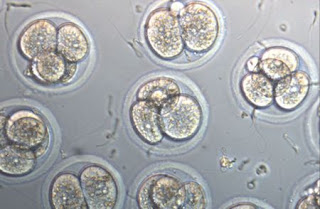 The research scientists (like those at the Yale School of Medicine who presented an intensive study a few years ago) tell us that around 80-85% of the embryos transferred during in vitro fertilization never make it to birth.

And since nearly two million kids have been born through IVF methods (as has been boasted by specialists in the field), that means that at least 10,000,000 embryos involved in IVF transfer didn't make it.

That's why, every once in awhile, I post this brief column I originally wrote for a Vital Signs" radio program. I'm afraid it is as relevant as ever.

What Happens to the "Extra" Embryos?

Amid all the talk about the ever-increasing availability of in vitro fertilization techniques, one issue is almost never mentioned; namely, what happens to all those extra embryos?

Well, to be frank, almost none of them make it.

Despite whatever warm feeling one might have towards infertile couples who are being helped to conceive a child through in vitro fertilization, it is important to understand this fact -- in vitro fertilization generally creates multiple embryos to ensure a greater probability of success. And, yes, most of the little humans thus created die. Either those embryos die as a result of the limitation of the female body to accommodate them properly or, in many instances, they are never implanted in the first place.

In the case of the embryos left over in the storage facilities of fertility clinics, different fates await them. They can, for instance, be frozen for some unspecified purpose in the distant future (the storage frequently being lethal itself) or they can be sold or donated to scientific research, a monstrous end from which none survive. Many IVF clinics merely incinerate the tiny guys and gals when they die, treating them no better than medical waste. Others, trying to be less crass, give the embryos some kind of funeral.

But no matter where the tiny bodies end up, they’re simply dead bodies, not living, growing human beings. And nothing, not even the heartbreak of being unable to naturally conceive children, can justify such brutal pragmatics.
Posted by DH at 1:07 PM