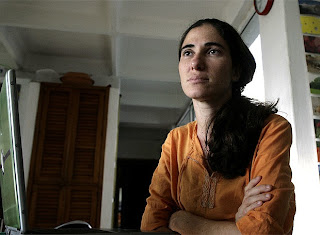 The kitchen no longer smells of kerosene, nor are the walls black with soot, nor is alcohol needed to “warm up” the stove. The tenement no longer wakes up with the noise of the air valve stoking the fire, and the lady’s allergies are not set off by the stench of burning. The little window no longer vents a gray smoke, and the food doesn’t have that faint taste of fuel. She no longer fears falling asleep and having the flames crawl through the wooden door. Now, no…

Quick, call Oliver Stone and Sean Penn! For here's evidence (finally!) that the Communist revolution has indeed freed Cuba's women from the drudgery of capitalism.

Now the problem is the electricity bill. The rice cooker that they gave out five years ago and that has had to be repaired dozens of time. The stove that was handed out in those days of the so-called Energy Revolution which seems to voraciously swallow kilobytes. The Chinese refrigerator — a replacement given out for the old Frigidaires — which spends more hours thawing than freezing. In short, now her great concern arises from the excessive bill with the blue numbers that they slip under her door.

If, before, she spent her day in search of fuel, now her pension goes to the high costs of electricity. Using the stove and water heater at least three times a week, means she now has to allocate 80% of her retirement to pay for energy. It’s gone from one distressing difficulty to another desperate one. Che changes a ceiling covered in soot for several days a month with no electricity because she can’t pay for it. Before she could complain, swear, scream at the stove, howl to the four winds because the damn burner wears her out. Now, no. Because it’s all been “the Comandante’s idea,” the “Comandante’s program.”

(Yoani Sanchez, "From Kerosene to Electricity," Translating Cuba.)
Posted by DH at 9:27 AM