Using Sex (and Weird Sex, At That) To Sell Candy 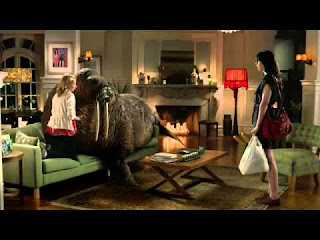 Brent Bozell passes along some very disturbing news from the world of advertizing.

That's not as edgy as a new TV ad for Skittles, the popular children's candy -- meaning the ad is targeted to children. It begins with a young woman kissing a walrus. This is not a peck; it's a moaning make-out session. "What are you doing?" asks another woman who discovers them. "Hey, this isn't what it looks like," says the kissing woman on the couch. "Good, because it looks like you're making out with my boyfriend," the second woman says. The other replies: "This isn't Bobby. It just looks like Bobby."

At least the audience might think the "boyfriend" here might be a human in someone's mind. But unlike the Snickers ads, the walrus never becomes someone else. It remains an ugly, flippered, mustachioed walrus. The kissing girl says of the walrus, "He says he's like these new Skittles Riddles. The colors on the outside don't match the flavors on the inside." She flirts with/teases the walrus with the candy, "You can't have it; you can't have it," before returning to the make-out session.

The advocacy group One Million Moms launched a campaign protesting the ad to Wrigley, arguing "not only is it disgusting, it is taking lightly the act of bestiality. While the shock value of this ad may draw attention to your product, it is harmful to children."

Let's face it, this is a thoroughly bizarre way to sell candy to children, if the message is focused on taste, quality, nutrition -- anything like that. But it's not. Commercials are designed to be cool, to make young people point and laugh. So the dark-suited executives quietly, and surely uncomfortably, acquiesce. They will agree to try anything to scandalize people into paying attention to their sales pitch.

The walrus in the commercial is not a real animal, but something animatronic. After all, Wrigley doesn't want to upset the people who protest animal cruelty during filming. On the other hand, upsetting people who protest indecencies to children doesn't bother them at all…

But do they have to use sex to sell products designed for children? Where do they stop?...The world of commercials is devolving just like the rest of television. Shock wins, and good taste is routed.

In case you'd like to pass along your opinions to the companies mentioned in this Brent Bozell column, here's the contact information:

* Skittles. Made by Wrigley. Here's their web contact page.

* Jack in the Box makes it extremely difficult for customers to contact them. For instance, when you hit the Contact Us link on their website, you get a page where you're warned about going further. "You have asked Firefox to connect securely to www.jackinthebox.com, but we can't confirm that your connection is secure. Normally, when you try to connect securely, sites will present trusted identification to prove that you are going to the right place. However, this site's identity can't be verified." Yipes.

I did find a corporate address but the company makes it plain that they only want to hear from investors or media. Okay, but since this is the only way you allow for me to reach you, here's where I'm sending my letter of complaint.

And, of course, a business that is this snarky and aloof (let alone one that uses sophomoric sexual innuendo to sell oily hamburgers) is a business best left alone.