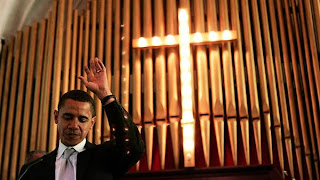 I've long complained that the National Association of Evangelicals is way out of touch with most of the churches who give them money. Now the NAE has endorsed Barack Obama's decision to leave deliberately unenforced national law regarding illegal immigration -- a law that he swore as President to carefully uphold.

The policy is controversial on its face. But, most important, the Obama administration is declining on yet another issue to ignore its responsibility to enforce U.S. law! And this is what the NAE is applauding.

But then, the NAE's endorsement of this lawlessness is just the organization's latest goofy bow to "progressive" political-correctness.

Is your church and/or denomination giving its blessing (and its money) to the NAE? If so, it's way past time for you to politely protest that action.

Mark Tooley, the Director of Institute on Religion & Democracy, comments, "Evangelicals and other Christians may disagree about the right immigration policies of course. The Scriptures and church tradition offer no detailed guidance for modern civil states and immigration law. But Christians have nearly always affirmed obedience to civil law, except when egregiously evil, and absent lawful means for amending the law. The NAE’s chief spokesman has affirmed an Administration’s decision to disregard the law after Congress has declined several times to legalize younger illegal immigrants."

"Does NAE President Leith Anderson favor the Administration ignoring or ceasing to enforce other laws? Earlier this year the Administration announced it would no longer defend the Defense of Marriage Act. Presumably the NAE disapproves, but on what basis, if a chief executive and his appointees may unilaterally pick and choose the laws they will enforce?"

"Do most members of NAE churches agree with such a cavalier stance towards our nation’s laws? Very doubtful."

Though not personally a member of the Mennonite Brethren, that is the denomination to which the small inner-city church where I preach belongs. So I'm preparing another letter to the denomination asking them to strongly protest this latest action of the organization AND to withdraw support until the NAE turns away from the liberal stands it has taken in recent years.

For further background, check out a few earlier Vital Signs Blog posts dealing with the NAE:

*  Pro-Abortion National Association of Evangelical Board Member Picked by Democrats

* More Disappointment with the National Association of Evangelicals

* Under Pressure, Richard Cizik "Reluctantly Resigns" from the NAE
Posted by DH at 10:20 AM