About That "Made in China" Label 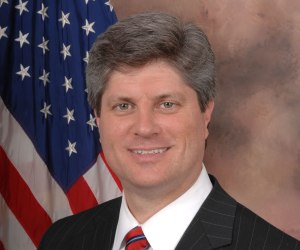 Nebraska Congressman Jeff Fortenberry's latest newsletter contained an excellent essay on the need for Americans to be more circumspect, more principled and more resolute in our dealings with Communist China. As a couple that has for many years sought to avoid "Made In China" products whenever possible, Claire and I were very pleased to read Jeff's remarks and I think you will find them of great interest too.

I print excerpts of his essay below but you can read the whole thing right here as well as sign up for his e-mail updates from the front page of his website. (Just look under the video clip at the top of the page.)

A key concern is our nations' complicated, lopsided economic relationship. Essentially, Americans buy great quantities of Chinese-made products as the Chinese government finances a great portion of the U.S. debt.  Currently, nearly one-third of our debt is foreign owned, with China easily being the largest debt-holder at nearly $1.2 trillion (officially).  Other estimates peg the figure at $2 trillion.  The effect of such indebtedness is the shift of our wealth assets into the hands of a foreign nation.  China has lax labor and environmental standards and manipulates its currency, creating unbalanced trading conditions.

Another concern is China's involvement on the world stage.  While it aggressively pursues its own mercantilist agenda, China lends little constructive hand to creating the conditions for international stability.  China is seen as an enabler of North Korea, which continues its march toward nuclear weapons development despite the protests of the international community.  Over recent months, as the U.S. and the European Union have accelerated important efforts to curb Iran's nuclear ambitions, China has been conspicuously absent from leadership in the discussion.  China continues to be a top buyer of Iranian oil—one of the key leverage points of economic sanctions against Iran.  At a discussion I attended, a Chinese official said, in so many words, the U.S. is to blame for Iran's pursuit of nuclear weapons capability.  And while China does not desire this outcome, China would continue to conduct business as usual with the Iranians…

Beyond this, an honest discussion is necessary about Chinese industrial virtues.  A Chinese official has said that, in dealing with "differences in corporate culture and the degree of openness to the outside world . . . Chinese companies always take domestic business practices with them." Those "domestic business practices," according to witnesses who have given congressional testimony, include fertility monitors on factory floors, invasively examining female employees for pregnancy and reporting pregnant women to the Chinese family planning police.  China still practices the violence of forced abortions. China also has tragically high suicide rates for workers, who use suicide as their only means of collective bargaining against dire and oppressive labor violations.

As China continues to advance as a world economic power, it has a choice: it can join the responsible community of nations in respecting the dignity and rights of all persons while conducting affairs with other nations in an ethical fashion, or it can stand by current practices and exploit relationships in order to fuel its own brand of corporate collectivism, undermining international stability in the process.

It is important that we seek reasonable and good relations with China—ideally and practically—for the sake of our own national security. But we must do so with open eyes.  As Americans, we must begin to address some of the hard questions that arise in our own relationship with China, and pause to consider the implications before reaching for another product carrying the "made in China" label.
Posted by DH at 9:27 AM