Democrats Don't Believe in Unicorns -- Or In Job Creation Either 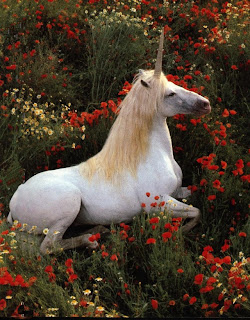 In the middle of delivering another tedious class-warfare sermon on Capitol Hill last week, Senate Majority Leader Harry Reid (D-NV, current net worth $3.4 million) made the rather startling assertion that millionaires who create jobs are “like unicorns – they’re impossible to find and don’t exist.”

Got that?  Only a tiny fraction of small businesses owned by people who make more than a million dollars create jobs in a traditional sense.  The rest of the small businesses owned by people with Harry Reid’s net worth are staffed by ghosts, robots, colonies of super-intelligent ants, and the like.  You probably didn’t make it halfway through that video before you were shouting the names of rich entrepreneurs who created thousands of jobs at the screen.  Don’t bother: Harry Reid can’t hear you, and he wouldn’t hear you even if he was standing in the room with you.

So… if rich people opening businesses aren’t creating jobs in the private sector, then who is?  For the answer, we turn to an even greater economic genius, House Minority Leader Nancy Pelosi (D-CA, current net worth $35.5 million.)  Yesterday she repeated a theory she made famous some years ago, and which has become one of the bedrock principles of the Obama Administration: jobs are created by people who don’t have jobs, through the magic of unemployment insurance, whose extension will create 600,000 jobs.  Why, that’s even better job creation than ObamaCare!  And you know how right she was about ObamaCare!

It’s the return of Trickle-Up Economics, an article of nearly religious faith on the Left these days, despite the rather stunning volume of evidence that it doesn’t work.  Cast a flurry of government dollars across the deserving poor, and their rush to spend Big Government’s largesse will cause businesses to pop up all over the place and begin hiring.

Obviously liberals are in love with this fantasy, because it means Big Government gets to exercise ever-greater control over the private sector.  Taxpayer money is seized and spent, while liberals get to posture as the selfless champions of the little guy.  The fact that it doesn’t work is a feature, not a bug, because it creates ever greater demand for that compassionate welfare spending.  Dependent constituencies are the lifeblood of collectivist politics...

I think John Hayward's Human Events article, "Your Christmas Present From The Democrats" may just be the read of the day. Go finish reading it right here.
Posted by DH at 11:51 AM