The New Symbol of the EPA: Wind Farm Graveyards 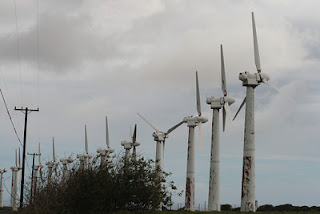 Here's a brief (but infuriating) story from EPA Abuse that you'll definitely want to pass on...as Ron Rizzo did to me. Thanks, Ron.

According to recent estimates, there are currently 14,000 abandoned wind farms dotting the landscape in the U.S.

In California, there are thousands of such abandoned sites, including Altamont Pass, Techachapin and San Gorgonio — all considered perfect spots for wind turbines.

So, what happened? Well, first off, birds get killed by these huge machines and the PETA crowd goes insane. The Altamont site, for example, is shut down four months out of the year to protect migrating birds. Second, when government subsidies stop, the projects die. Third, wind power has proven to be unreliable as a consistent source of power. There’s either too little wind, too much wind, or it’s too cold to operate them.

In Britain, the energy industry admitted as long ago as 2008 that wind turbines are idle up to 30% of the time because of the unreliability of the wind. A report from the British Renewable Energy Foundation at the time describes the economically disastrous wind turbine industry.

It is unlikely that the Obama Administration will let facts get in the way of their war against fossil fuels and their love affair with solar and wind power. Expect more taxpayer dollars to be flushed down the rathole of solar and wind boondoggles. Expect to see more abandoned wind farms in the future — as long as Obama remains in office and the EPA is run by the climate alarmist zealot Lisa Jackson.
Posted by DH at 11:41 AM