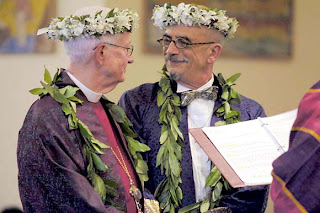 Most Holy Redeemer Church, San Francisco’s notoriously ‘gay-friendly’ parish, has invited a retired Episcopalian bishop who left his wife and family to ‘marry’ a man as guest speaker at a Nov. 30 Advent Vespers Service.

The invited guest is Episcopal Bishop Otis Charles [pictured here on the left at his homosexual "marriage" ceremony at an Episcopal church] who in 2005 provided a biographical statement to the Lesbian, Gay, Bisexual, & Transgender Religious Archives Network, which said in part: “Since 1979 he has been among a growing number of bishops who have spoken out for full and complete inclusion of gay and lesbian people in the church without restriction, recognizing their calling to ministry and rejecting the notion that a baptized homosexual must live a celibate life. Whether in an informal gathering or the pulpit, he characteristically begins, ‘I am a gay man, an Episcopal (Anglican) bishop, a queer who only just mustered the courage to publicly acknowledge the truth of my life.’"

Not included in the statement is that Charles divorced his wife of 42 years, and has five children. It also does not include the fact that, on April 24, 2004, he “married” a man named Felipe Sanchez Paris in a ceremony at St. Gregory of Nyssa Episcopal Church in San Francisco...

Pro-homosexuality Vespers speakers are not unusual at Most Holy Redeemer....

So, tell me, just how apostate and blasphemous does a church have to get before the bishops (or for that matter, the Vatican) take corrective action?
Posted by DH at 11:54 AM