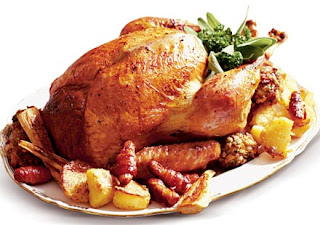 From 2009 comes a special Thanksgiving greeting all the way from Australia. It comes via the editor of Mercator Net, Michael Cook

Happy Thanksgiving to all of our American readers. Having grown up in the US, I remember Thanksgiving as the premiere holiday, with the possible exception of Christmas. Outside, the skies were grey, the trees stripped bare, the stony fields frozen and dusted with snow. Inside, there was the warmth of a wood stove, steamed-up windows, a hubbub of relatives. At Christmas there were presents but at Thanksgiving there was food, food in cornucopian abundance to be shovelled down with Gargantuan gusto.

Somehow I recall nuts as the starting gun of this labour of boyish gluttony: peanuts, walnuts, brazil nuts, almonds, pecans, hazelnuts, all cracked and crunched underfoot. Then, getting down to business, the turkey, its skin crisp and glistening, its flesh carved into drumsticks, dark meat and white meat, its innards quarried for stuffing. I always hung out for the succulent tail, tastier but inexplicably ignored and exempt from exhortations to “share!”. Then, not as significant, but not to be ignored, baked potatoes smothered in high-cholesterol sour cream, sweet potatoes with butter, boiled onions with butter, corn with butter and salt, candied carrots with butter, broccoli with butter. All dribbled with dark, delicious, greasy gravy and garnished with cranberry sauce. You had to pace yourself, so it was best to ignore the salads and coleslaw was awful at the best of times. The fourth Thursday in November was a great choice for Thanksgiving, I used to think. It was cold and you could fit more in.

After a while, it was time to move on to the pies and ice cream. There were about three per aunt -- apple, blueberry, chess, cherry, pumpkin, and mince. Americans like pies. Hilaire Belloc (I quote from memory), surfeited with pies, asked for mercy and found none. “They stare at you in mild surprise, And serve you other kinds of pies.” That's about right.

But the best part, really, was the warmth of a home, the comfort of family, the feeling that you were surrounded by people who cared. It was something to be thankful for. I'm sure that's why Dawkins, Hitchens & Co will never succeed in America. With No One to be thankful to, you'd have to abolish Thanksgiving Day.
Posted by DH at 8:09 AM