Will the Real Che Guevara Please Stand Up? (Take Two) 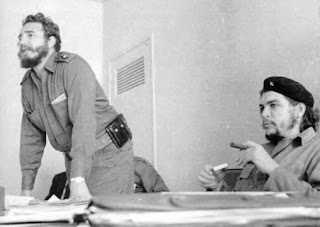 On this date back in 2006, I posted a letter that was sent to Cuban-American Pundits (a blog which emphasizes the cause of liberty for Cuba) as well as a link to the reply. It's a post well worth repeating.

The viewing of films such as "The Motorcycle Diaries" and Andy Garcia's "The Lost City, has sparked a renewed interest in Cuba, the revolution and the Cuban people.

My question is; how do Cuban-Americans today, view Che Guevara, his revolutionary deeds and his present-day cult following. It appears that the La Raza crowd in the U.S. has embraced Guevara as their hero, as evidenced by the placards with his image carried by the protesting illegal immigrants and their supporters this last Spring. Do you think these folks are just ignorant of Guevara'a exploits or is it me and my lack of understanding the man. As a Cuban-American, how do you view this Che Guevara adoration.

So, if in fact, Guevara is the only hero these activists can come up with, what say you?

Interested in the answer? You should be -- it's a good one. So, for those of you more interested in historical reality than you are muddle-headed slogans and T-shirt portraits, check out the real Che Guevara right here.
Posted by DH at 8:32 AM