Women Turning Back to "Propriety" -- And Erica Jong Is Ticked 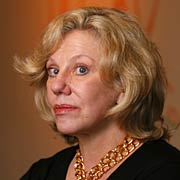 "We idealized open marriage; our daughters are back to idealizing monogamy. We were unable to extinguish the lust for propriety."

In 1973 Erica Jong's Fear of Flying propelled her into a highly visible role in the new feminist movement. Some even refer to Jong as a key champion of the sexual revolution but that's not accurate. The sexual revolution had been in full swing (no pun intended) for some years. Jong simply made use of the new interest in feminism from publishers and in so doing made a name (and a lot of money) for herself.

But at 69 Erica Jong is still very interested in sex -- as long as it's sex along feminist definitions. But when sexual expression begins to slip back into those manacles which for centuries hindered its "free flight" -- faithfulness, marriage, children -- then Ms. Jong is definitely not amused.

She expresses her frustrations in a New York Times Sunday Review article that is startlingly bitter. It is a sad piece, a petulant whine that the feminist revolution has fallen in on itself. It's supposed gains and victories turned out to be defeats. Younger women have seen what happened after the tsunamis of the sexual revolution and feminism crashed upon Western culture. They saw the effects of broken hearts and homes, of birth control pills, of no fault divorce, of abortion, of epidemics of STDs, of the coarsening of romance and social graces, and so on.

They decided to go a different way.

And Erica Jong, still blind to the real-world effects of feminism, can't stand it.
Posted by DH at 12:00 PM