Thrilled to Death: The Euthanasia Coaster 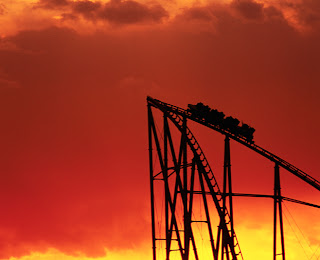 We should be saddened, of course, but should we really be surprised that our culture, fixated as it is on entertainment, thrills and technology, and determined to shake off its traditions defending the sanctity of human life, desires to produce such a thing? Here's the story from Discovery News.

The three-minute ride involves a long, slow, climb -- nearly a third of a mile long -- that lifts one up to a height of more than 1,600 feet, followed by a massive fall and seven strategically sized and placed loops. The final descent and series of loops take all of one minute. But the gravitational force -- 10 Gs -- from the spinning loops at 223 miles per hour in that single minute is lethal.

According to Urbonas, the "Euthanasia Coaster is a hypothetic euthanasia machine in the form of a roller coaster, engineered to humanely -- with elegance and euphoria -- take the life of a human being."...

Urbonas sees it as both an intellectual and artful departure from the world, one that isn't about the paperwork and medical issues of the current euthanasia system. The few places where voluntary euthanasia is legal include: Belgium, Luxembourg, the Netherlands, Switzerland, and the U.S. states of Oregon and Washington.

"There is no special ritual, nor is death given special meaning except that of the legal procedures and psychological preparation. It is like death is divorced from our cultural life…" Urbonas writes. "…But if it is already legal, why not to make it more meaningful?"

How do you turn a rollercoaster ride into a "meaningful" death? Urbonas has built in a long, slow trek to the top before the first fall. In fact, of the three-minute ride, two minutes are devoted to the climb. Urbonas writes: "…The rider has a few minutes to contemplate his decision and his life in retrospect. He would find enough time to adapt to the height and get through a series of imaginary fatal falls, while realizing that the objects on the ground are getting smaller…The slightest movement of the car would trigger intense heart-beating and goosebumps and most importantly it would test your decision. Therefore the very top of the tower is an ideal place to give the very last word."

And that's when the rider is required to make the ultimate life decision: choose to continue living or push the "FALL" button and die.

So how exactly does one physically die by rollercoaster? The science behind it is pretty simple: spin fast enough and hard enough and your brain won't get enough oxygen to keep functioning. The vertical rolls of the coaster would essentially create enough centrifugal force on the body that the blood rushes down in the body instead of up to the brain...

For now though, the Euthanasia Coaster remains at a 1:500 scale model. Urbonas doesn’t see it being built in full until "…the future where the politics of technologies are much less centralized and more creative, diversified and democratic."
Posted by DH at 11:19 AM