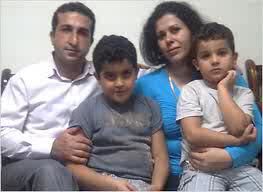 Iranian Pastor Youcef Nadarkhani, who is facing the death penalty, again refused to convert to Islam to save his life.

Nadarkhani was arrested in 2009 for the crime of apostasy because he allegedly abandoned Islam for Christianity. As a pastor, Iranian clerics believe that Nadarkhani was preaching in order to convert Muslims.

Before his last hearing Wednesday, Nadarkhani had been given three previous chances to repent, and all three times he has refused. After his final refusal Wednesday, no verdict has been announced, but many expect that he could be put to death as soon as Friday...

There were rumors on Wednesday night that Nadarkhani's execution sentence was to be waived after the final trial, but contradicting reports indicate that the news was incorrect.

"We've had some reports that there has been a verbal announcement from the court in Iran that the sentence is annulled but we urge caution," said Christian Solidarity Worldwide, a religious group campaigning for Nadarkhani's release.

"It's been known that verbal announcements have been directly contradicted by later written statements. We are still calling for international pressure to be kept up." (International Business Times)

Prayers (fervent and frequent) remain in order.
Posted by DH at 11:01 AM