To Protect Your Home from Flooding? 5 Sandbags Ought To Do It. 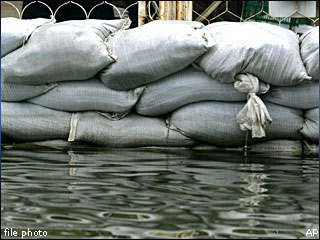 No, of course, you won't be surprised to find ironic hypocrisies in the doings of liberal politicians and bureaucrats -- they are everywhere -- but sometimes they are so over the top that you've got to highlight them, laugh at them and then use them as educational illustrations for your kids. Here's one of those.

Warner Todd Huston passes along a Twitter message from Alexa (who blogs at Alexa Shrugged) who noted a glaring inconsistency in the Washington, D.C. bureaucracy when it came to preparing for Hurricane Irene. It seems that officials required citizens to show proper identification in order to pick up sandbags to protect their properties. The citizens picked these up at the parking lot of RFK Stadium and were limited to 5 bags per household.

Yes, that's right. 5 bags. You can imagine how useful 5 bags are going to be in turning away the floodwater racing towards your house.

But put that wickedly inefficient point aside for a moment and consider this one. The bureaucrats of Washington D.C. believe that voting privileges are worth...well, they're worth less than 5 lousy sandbags anyhow. Because to get the bags you need to show I.D....but not when you come to vote.

WTH then adds a Twitter response which adds perceives another angle to the story.

"What is the main criticism that lefties have about voter I.D. laws? It is that 'the poor' are being kept from voting because it is a 'poll tax' to have the onerous requirement of getting a state I.D. So, why are Democrats in D.C. now forcing 'the poor' to lose their homes in a storm because they have that oppressive requirement of having an ID to get their five little sandbags?"