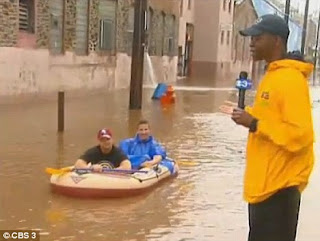 The Daily Mail reports that a pair of flood adventurers named Pete and Pat were stopped by Philadelphia police (after telling a local television reporter they were just looking to have some fun). Minutes after they were interviewed, police ordered Pete and Pat to "shore" and hauled them away in handcuffs.

Hardly; the jails can't hold that many Democrats.
Posted by DH at 12:07 PM