Obama's Department of Justice: Only the Far-Left Wing Need Apply 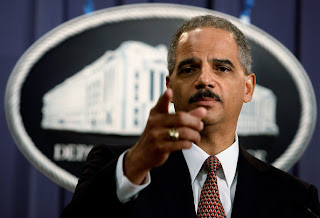 Since Eric Holder took the reins as Attorney General, the Justice Department has hired 15 career attorneys in the Civil Rights Division’s Employment Litigation Section. Every one of them boasts stellar left-wing ideological credentials. All have either associated themselves with prominent Democrats, worked for left-wing legal organizations, or staked out left-wing positions on controversial issues.

The complete political uniformity of this section aligns with DOJ’s hiring in four other sections of the Civil Rights Division. The Heritage Foundation’s Hans von Spakovsky has been documenting the left-wing dominance of the division in a flurry of posts at Pajamas Media. Not a single attorney hired during President Obama’s tenure in the five sections von Spakovsky has examined has deviated from the division’s left-wing ideology.

Here's more from the Heritage Foundation's Lachlan Markay.
Posted by DH at 9:05 AM