All's Well That Ends Well for "When Swing Was King" Gig

Yesterday's "When Swing Was King" didn't start off too well. First of all, we had to skip out of an important meeting in Lincoln to get back to Omaha in time for the presentation only to discover that it had been canceled.

Let me explain. Our arrival at the place, a large and expensive assisted living complex where we've just started doing regular performances (this was our second), clearly surprised the fellow who was working at the front desk. He hadn't seen us on the schedule. Worse still, he told us that the AD (Activities Director) wasn't there because she had left for a family emergency. He then said that they couldn't announce over the in-house intercom that we were here and the program was still on. Hmm. It didn't look good.

Had we goofed up? No, Claire re-checked and saw that the AD had confirmed the program just the day before and we were set for 2 o'clock. It was now only 1:30 but we knew from experience that the absence of the AD would mean a smaller audience. The ADs and other staff are critical to a presentation's success because they promote the program, give frequent reminders and, in many cases, make sure they have help to get there. So with the AD gone and her assistant just sitting  in the cafeteria talking on her cell phone rather than helping direct people to the auditorium, we realized this afternoon's program was in serious jeopardy.

And our troubles weren't over yet. Indeed, it was our arrival at the auditorium that really got to us. For not only was it empty and not only were we left without any help in working the room's complicated lighting system, there was actually a sign on the door saying to residents that it was closed for repairs!

Well, it wasn't. It turned out that the repairs had been completed but no one in the place had bothered to remove the sign.Good grief.

What should we do? Well, since there was such an enthusiastic response the previous time we were here, we decided to set things up anyway just in case anybody stumbled in. We set everything up, figured out the lights and tested our sound levels. But when it was five minutes before our starting time and not a single soul was present, we figured it was going to be a wash. Still, we decided to go ahead anyway. For who knows? Maybe there would be a stray senior citizen wheeling by who would be attracted by the big band music wafting through the halls.

It worked! In fact, we ended up with seven engaging and fun people. No, it wasn't the 20-25 we usually have in "When Swing Was King" audiences and it was way short of what we had the last time we were in this facility but the folks that came really enjoyed themselves. And so did we. 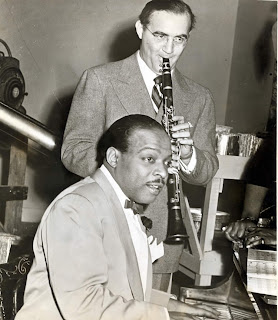 "Oh, my how we love this music," said one dear lady. "You two are sure doing a wonderful thing in bringing it to us. Thank you so much." Another gal, who was accompanied by a non-resident friend, described how they used to jitterbug to the music of Benny Goodman. "Oh, that was good to hear him again! And that song by Artie Shaw!" Her friend jostled her arm, "I thought you said you liked the one by Doris Day best?" "Oh, yes; that one was wonderful too," her friend replied. "And the Nat King Cole was good too. And then that first one they played by Glenn Miller..." They went on that way, arm in arm and still naming songs as they walked out of the auditorium.

But my favorite moments of the afternoon came as I was talking to a 96-year old fellow named Bud who told me proudly that he was the oldest person in the place. "I wasn't when I came here 5 years ago but I am now! And you know, I don't why, but just by being as old as I am, people keep giving me some kind of award!" He was a really swell guy, a Navy veteran of WWII who loved big band music and crooners like Bing Crosby, Nat King Cole and especially Perry Como. "You know, I've got 160 records but I can't play 'em too easily anymore so I'm expecting you two to keep comin' and playing this music for me!"

Wow. If we had to skip our meetings, drive back to Omaha and set up the whole program for Bud alone, it would have been well worth it. For such is the honor, the delight and the fulfillment we receive from bringing "When Swing Was King" to these guys. Thank You, Lord, for prompting us to begin this ministry and for blessing us so much as we've proceeded with it in this last year. And thank You for making sure we didn't pack up early yesterday. We would have missed out on some superb treasures indeed.
Posted by DH at 10:41 AM