Michelle Obama Wants Change -- Your Change, And Lots Of It! 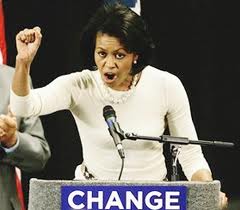 A few days ago I wrote a post on my own site saying that the Obamas travel like South American dictators. Well, here is more evidence of this. Recent reports find that Michelle Obama alone has spent over $10 million of “Obama’s stash” — or rather $10 million of our tax dollars — just on vacations for herself and her kiddos.

Rush Limbaugh calls her “Moochele Obama” and that is starting to look like an apt handle for the wife of the biggest spender in Washington. With her trips around the world, her stays at luxurious 5-star resorts and hotels, her many shopping trips, she is looking more and more like the biggest mooch in presidential history.

Yet, where is the press to lambaste Moochelle Obama? Scolding first ladies for their spending of the people’s tax dollars on baubles and trips is a long tradition in the American press corp. As far back as Dolly Madison the press has attacked presidential wives for spending. Mary Lincoln was mercilessly slammed for buying china, housewares, and dresses during the Civil War. As recent as Ronald Reagan’s era the press slammed FLOTUS Nancy for her spending. Yet, Moochelle gets a pass?...

So how much has Moochelle spent? "The First Lady is believed to have taken 42 days of holiday in the past year, including a $375,000 break in Spain and a four-day ski trip to Vail, Colorado, where she spent $2,000 a night on a suite at the Sebastian hotel. And the first family’s nine-day stay in Martha’s Vineyard is also proving costly, with rental of the Blue Heron Farm property alone costing an estimated $50,000 a week."

And while we are all losing our jobs and our homes, Moochelle is flying about the planet drinking top shelf vodkas and expensive sparkling wines.