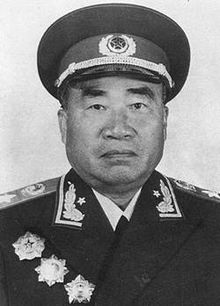 Joe Biden's unconscionable statement in a formal address before the Chinese people saying that he "understands" and refuses to "second guess" the government's one-child-only policies -- policies he well knows include forced abortion, forced sterilization, imprisonment and other techniques of terrorism -- shocked and disgusted most Americans. (See above post for how the Obama administration is anxiously, but quite insincerely, engaged in damage control.)

However, because Biden's comments in support of forced abortion were so stunningly despicable, other outrages in his very long speech have been overlooked. But not by Terence P. Jeffrey.

Zhu De, in fact, was the commander of the People's Liberation Army and a full partner with Chairman Mao in transforming the world's most populous nation into a communist dictatorship. "Zhu De was one of the most important members of the CPC's first generation of leading collective with Mao Zedong at the core," says the Communist Party of China Encyclopedia.

This "founding father of the republic," as Biden called him, was a key figure in a regime that outlawed the Roman Catholic Church to which Biden himself belongs.

While lauding Chinese communists in China, Biden was tongue-tied in trying to explain the greatness of America and our people.

"It's hard to define what an American is," Biden said in his speech at Sichuan. And apparently it is too hard for Biden.

What our vice president should have told the Chinese students was this: America became a great nation because it was founded on a true understanding of the nature of man and the purpose of government. We believe that all men are created equal and that God gives each and every one of us inalienable rights -- including the rights to life, liberty and private property -- and that it is the duty of the government to protect these rights. We believe God gave these same rights to every person here in China and that for China to become a truly great nation, the Chinese government must recognize these rights and protect them rather than deny them to its people.

Biden should have said to the Chinese regime: Tear down the wall between your people and their God-given rights.