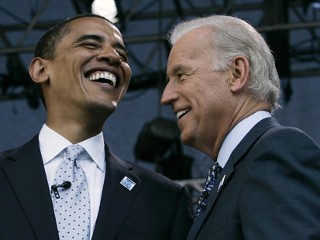 A) Joe Biden telling the Communist Chinese that he "understands" and accepts their brutal one-child-only policy?

Or B) Joe Biden, desperately trying to back off his remarks after being roundly criticized for them -- while he and the Obama administration is still promoting, even enabling with American tax dollars, China's barbaric persecution of her own people?

Reggie Littlejohn, though outraged at both, rightfully opts for the latter.

Blasted with criticism, Vice President Biden is trying to take back what he said in Sichuan, China: that he “fully understands” China’s one-child policy, but is “not second-guessing” it. Chastened, Biden now says that China’s coercive population-control program is “repugnant.” Indeed, his spokeswoman insists that the entire “Obama administration strongly opposes all aspects of China’s coercive birth limitation policies, including forced abortion and sterilization.” Words spoken before the world in an official capacity cannot be unspoken. The bell, once rung, cannot be un-rung.

However, the Obama administration now has publicly admitted it knows that China practices forced abortion and sterilization...

If the Obama administration “strongly opposes” forced abortion in China, then why did they restore funding to UNFPA (United Nations Family Planning Fund), an operative “abortion provider” in China? In 2001, the U.S. cut funding to UNFPA because an investigation, headed by then–Secretary of State Colin Powell, found that UNFPA was complicit in the coercive implementation of China’s one-child policy. In 2008, the U.S. State Department reaffirmed that determination, and yet the Obama administration resumed funding in 2009. President Obama’s FY 2012 budget requests $47 million for UNFPA.

Funding UNFPA and IPPF is not “strong opposition” to coercive family planning. It is support. At issue are the true aims behind the actions of the Obama administration. Are they “pro-choice,” as they say, or is their real aim population control, even if coercive?...

If the Obama administration is sincere in saying it “strongly opposes . . . forced abortion and sterilization,” then it will either insist that UNFPA and IPPF cease operation in China, or it will defund these organizations.
Posted by DH at 12:06 PM