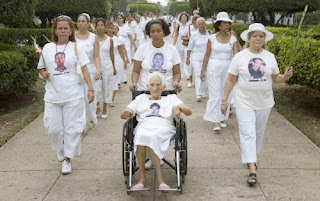 Here's one of the latest scenes from the "Worker's Paradise" which is Cuba.

"It wasn’t enough for them to snatch the gladiolus from our hands, they began to beat us, they ripped all our clothes, I have scratches all over my body… So does Aimee and all the other women in the group. We all did a “sit in” and they almost killed us …They did not stop slapping us; we are all scratched They pulled our hair. They dragged us. They threw rocks at us as we remained united, in silence on the ground, firm in our conviction that what we want is the freedom of our political prisoners and the freedom of Cuba."

This was all organized and ordered by State Security whom we make responsible for what could have happened to each one of us and the physical condition we are all presently in. They didn’t care that they beat up Nersa Fernandez Fonseca, an older woman in her fifties. Several of us had to go to the hospital due to our ailing physical conditions.  I was hit on the head with a stone and have a bump. I’m all bruised. When they attacked us, they never took into consideration the fact that we were women  walking in silence."

The above is part of a statement made by Tania Montoya Vazquez, one of the 16 “Ladies in White" (a woman's pro-democracy group in Cuba) who suffered a violent attack by Castro's security forces after attending mass in the Basilica of “El Cobre" in Santiago de Cuba where they had been praying for the freedom of all Cuban political prisoners.
Posted by DH at 12:12 PM