The Death Toll Is Still Rising (At Planned Parenthood) 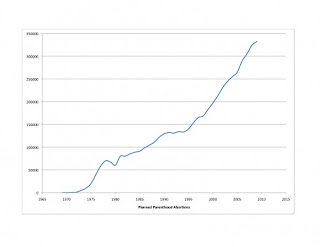 The accompanying chart shows the numbers of surgical abortions committed by Planned Parenthood from 1970 through 2009, a year in which 332,278 preborn children were destroyed. And the chart is based upon Planned Parenthood's own statistics which means that the numbers could be even higher. After all, an organization that kills preborn children and has frequently been caught lying about other matters is certainly not to be trusted to give the most accurate count.

Even more important to note is that the chart does not record the numbers of abortions which Planned Parenthood commits by the use of various chemicals.

Here are Planned Parenthood’s own numbers. They reflect their activity in the abortion arena. As one can see, they are increasingly invested in performing this gruesome procedure.

Baby Boomers: These are the children who never were born, who will never pay the taxes we’ll need to sustain us in our retirement; these and the others totaling 53 million lost citizens.

And we let it happen. We’ll do well to remember that during euthanasia’s ascendancy.
Posted by DH at 11:57 AM