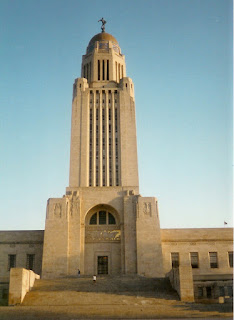 However, that momentum has crashed upon the stone wall of political chicanery which, unfortunately, has been a regular part of the Unicameral's Judiciary Committee in recent years. It is, no doubt, an ugly mistake in the structure of the legislature that allows as few as four people to completely thwart the cause of representative democracy -- keeping even the most popular, necessary and constituitionally-sound bills from ever getting the honest hearing of the full body.

So what can we do?

First of all, read the column below about LB 690 by Mrs. Orr.

Then use her article as a stimulant to e-mail, write, call (or all of the above) the senators who make up the Judiciary Committee. Let them know you desire political transparency, responsibility, and democracy to be priority values in the Nebraska Unicameral. Inform them that politicians who abuse the rules in order to make deals and promote only their own agendas are politicians you will vigorously oppose in the future. And let them know you back LB 690 and want it voted out of the Judiciary Committee and onto the floor ASAP.

In Nebraska, “the Good Life” has been a slogan for as long as most of us can remember.  What is it that makes Nebraska unique in providing a good life to its citizens?

I believe it begins with the strength of our families. It is because of my deep concern for the parents and daughters in our state that I am writing today.

On March 9 I went before the Nebraska Legislature’s Judiciary Committee to testify on behalf of State Sen.Lydia Brasch’s priority bill, LB 690, which would establish that a pregnant minor must get parental consent prior before she can make the life-altering decision to have an abortion.

This bill helps to preserve Nebraska families, protect young girls and save the lives of Nebraska babies by ensuring parental involvement at a crucial time.

This significant bill has been examined and scrutinized by the Judiciary Committee and its members. It has also received an opinion by the Attorney General’s Office that the judicial bypass language included for those few unfortunate circumstances when a minor cannot go to her parents without risk to herself is constitutional.

In short, it is a solid bill that will protect the integrity of families in our state and will be upheld by the courts.

Young girls in our state need the support and counsel of a parent in a time of crisis, and for a young minor, pregnancy certainly is such a time. LB 690 would improve our current statutes by upgrading the involvement of parents over the current law, which requires parents to be notified only when their daughter is undergoing an invasive surgical procedure.

Under our current law, the person ushering the girl to the abortion clinic can actually be an abuser who poses as her parent.  Meanwhile, the parents are potentially left with the devastation and medical expense of an abortion obtained without their knowledge. The failure of current law to require parental consent is leaving young girls vulnerable to coercion and abuse. The parental consent bill closes this gap and helps remedy this significant deficiency.

Minors are emotionally and physically vulnerable on many fronts, and the life-changing impact of pregnancy should not be navigated apart from the love and wisdom of the most significant adult in a girl’s life.

Parental consent laws provide protection from harms inherent in abortion and promote the legal right of parents to be involved in the medical decisions of their daughters. Parents possess information essential to a physician’s exercise of his or her best medical judgment concerning their daughter.  Further, parents who are aware that their daughter has had an abortion may better ensure the best post-abortion medical attention.

Parental consent laws better reflect the stated public policy of Nebraska set forth in Nebraska Rev. Stat. 28-325(1), which provides that it is “the will of the people of the State of Nebraska and members of the Legislature to provide protection for the life of the unborn whenever possible.”

A 2008 study by Michael New showed that parental consent laws reduce the minor abortion rate by an average of 18.7 percent, while parental notification law — our current law — reduces the abortion rate by about 5 percent. Statistically for Nebraskans, this would translate into 100 more babies born alive each year.

This current legislative session is drawing to a close, and LB 690 is languishing in the Judiciary Committee. I urge the committee to move this bill to the floor of the Legislature, where I am confident it will be met with broad support and signed into law before the end of this session.

As Nebraskans, let’s promote “the Good Life” by standing behind LB 690, the parental consent bill.
Posted by DH at 2:00 PM