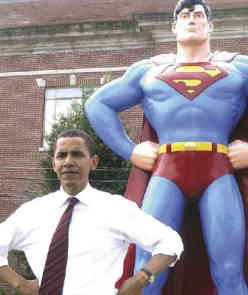 Contrary to what one might think after Barack Obama's egoistic preening following the death of Osama bin Laden, it was not the President himself who dropped into that compound and opened fire on the arch-villain. No. Barack Obama was the President who took 16 hours to finally give the go ahead to an operation that was more than ready and who then had to be reminded to throw a jacket over his golf shirt for that now famous photo op in order to keep Americans from remembering where their Commander in Chief's priorities lay.

Here's some excellent articles that go beyond the self-serving talking points coming from the White House.

Tom Leonard's story (with stunning photographs) in the Daily Mail.

And from an earlier Andrew Malcom piece:

According to another one of those White House briefings of reporters designed to suck up all available credit for good news, President Obama's homeland security advisor reveals that it was a really tense time in the air-conditioned White House as unidentified U.S. Navy SEALs closed in on the world's most wanted man after midnight a half a wohomeland security advisor john Brennan 5-2-11rld away.

The heavily-armed commandos flying in a quartet of darkened Blackhawk and Chinook helicopters more than 100 miles into Pakistan were probably listening to their iPods and discussing the NFL draft.

"The concern was that bin Laden would oppose any type of capture operation," said Obama's Sherlock Holmes. So U.S. troops were prepared "for all contingencies."

In fact, this weekend was such a tense time in the White House that Obama only got in nine holes of golf. But he still managed to deliver his joke script to the White House Correspondents Assn. dinner Saturday evening.

Sunday was, Brennan revealed to his eager audience, "probably one of the most anxiety-filled periods of times in the lives of the people assembled here." Poor poor bureaucrats. Extra Tums all around. Did someone order dinner?

There may have been a little anxiety aboard those combat choppers. Who knows? We can't hear from them...
Posted by DH at 1:40 PM