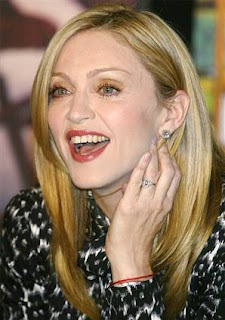 The Daily Mirror is reporting that Madonna Louise Ciccone, better known by her first name alone, has got an itch for a new religion. Well, since she was raised Catholic and is now investigating Opus Dei, the Catholic group that stresses the sanctity and blessings available in ordinary life, maybe it's an investigation of her old religion.

At any rate, it seems she's tired of following the mystic variances of  Kabbalah.

Of course, Madonna may be most intrigued by the secrecy surrounding Opus Dei. It was, after all, the group whose controversial nature was expanded (and distorted) by the inane plot of The Da Vinci Code. And it was the secrecy and mystery -- along with what she felt was a lack of moral restrictions -- that attracted her to Kabbalah as well.

But in Opus Dei she won't find any such freedom from moral duties. And that might mean she will quickly move on to something else. But then again, it may indicate that Madonna is finally searching for real answers about God, about herself, and about her soul's desperate need of salvation.

As a sinner with an ugly past myself, yet a sinner saved by the mercy of God poured out by the blood of Jesus for my atonement, I rejoice that salvation is freely offered to all. And so this report, despite its origin in a British tabloid and despite what I know about the singer's past blasphemies against God, is one that will elicit new prayers for Madonna. Lord, may her new search reveal to her that You have been challenging her all along to come to the cross of Christ. For by simple faith in what He accomplished on that cross, even the "Material Girl" can find spiritual peace, purpose and full forgiveness.
Posted by DH at 11:02 AM