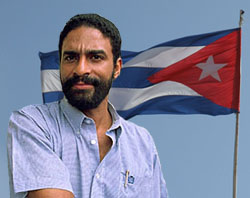 Having long prayed and actively participated in the campaign for freedom for human rights champion Dr. Oscar Elías Biscet, we are very pleased to pass the word on that he was released from Cuba's barbaric prison system. However, Dr. Biscet risks further punishment from the Castro brothers because he's promised to stay and work for justice in his homeland.

“I am a defender of life and liberty, and on those two values I base all that I do,” Biscet explained. “I refused to leave Cuba because I’ve pledged never to abandon it until I achieve my objectives -- democracy and freedom for Cuba.”

Last Friday, after eight years of imprisonment, Biscet was released under an “extra penitentiary license." This means that Dr. Biscet will continue to serve his 25-year sentence outside of prison...as long as he shows “good conduct.”

That's a very precarious position for a man who Castro has had arrested nearly 30 times. Prayer then remains very much in order as do calls for Biscet and other peaceful prisoners of conscience who are unjustly suffering in Cuban jails.

Here's more from the Human Rights Foundation.
Posted by DH at 1:30 PM