Air-Guitar Democrat Had An Extra Reason to Get Outta' Wisconsin 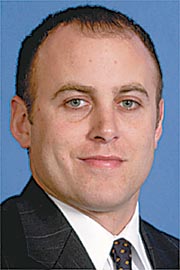 “I am willing to take responsibility for my actions. My concern right now is that my personal situation is distracting from the much more important issue facing our state. We have tens of thousands of working people at the Capitol every day and that must remain our focus. I will continue to do my job and stand up for Wisconsin’s working families.”

That's Wisconsin Democrat legislator Gordon Hintz on his citation for sexual misconduct. The law Hintz is charged with breaking prohibits paying or receiving “a fee, directly or indirectly, or to offer or ask for anything of value, for touching or offering to touch the sexual parts of another.” The citation was issued to Hintz following a police stake-out of the Heavenly Touch Massage Parlor in Appleton. 6 people were jailed after the police operation but Hintz was allowed to post a $2,667.50 bond. Thus he was free to be out on the streets. Or, for that matter, hiding out in an Illinois hotel, perhaps one located near a massage parlor.

Not that massage parlors constitute Representative's Hintz's only social recreation. Apparently, he is a serious "air guitar" player, even serving as a past Los Angeles champion in the art form. And in that arena too he demonstrates the same strength of personal conviction as he is now using to harangue Wisconsin governor Scott Walker for cutting spending.

The following is from a 2005 article in LA Weekly:

The night was not free of controversy. 2003 L.A. champ Gordon “Krye Tuff” Hintz criticized the scoring that he felt helped the night’s only female performer, Elaina “Cherry Lain” Vaccaro, defeat more technically savvy players. Vaccaro’s performance of the Rippingtons’ “Star-Spangled Banner” was marked mostly by her impressive legs and a good deal of jiggling. Said Hintz, an assembly candidate in Oshkosh, Wisconsin: “The integrity of air guitar in year three is seriously under attack. Air guitar has turned into a joke . . . The more skin you show, the better your score gets.”

And skin is something...No, let's not go there. After all, you start in on punchlines about this story, you'd be here all afternoon.

If you really want to (and I don't really advise it), you can watch a clip from Hintz's air guitar performance here on You Tube.

And remember (sigh), this guy was elected to public office.
Posted by DH at 12:01 PM