"Black Men Need to Be in the Home" 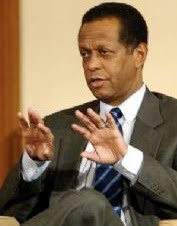 Even a liberal columnist like Bob Herbert understands that government isn't the solution to the extreme problems facing black Americans. Here are some thoughts from his latest New York Times column:

...We know by now, of course, that the situation is grave. We know that more than a third of black children live in poverty; that more than 70 percent are born to unwed mothers; that by the time they reach their mid-30s, a majority of black men without a high school diploma has spent time in prison. We know all this, but no one seems to know how to turn things around. No one has been able to stop this steady plunge of young black Americans into a socioeconomic abyss...

It is inconceivable in this atmosphere that blacks themselves will not mobilize in a major way to save these young people. I see no other alternative.

The first and most important step would be a major effort to begin knitting the black family back together. There is no way to overstate the myriad risks faced by children whose parents have effectively abandoned them. It’s the family that protects the child against ignorance and physical harm, that offers emotional security and the foundation for a strong sense of self, that enables a child to believe — truly — that wonderful things are possible.

All of that is missing in the lives of too many black children.

I wouldn’t for a moment discount the terrible toll that racial and economic injustice have taken, decade after decade, on the lives of millions of black Americans. But that is no reason to abandon one’s children or give in to the continued onslaught of those who would do you ill. One has to fight on all fronts, as my Uncle Robert said.

Black men need to be in the home, providing for their children. The community at large — including the many who have done well, who have secured a place in the middle or upper classes — needs to coalesce to provide support and assistance to those still struggling...
Posted by DH at 10:42 AM