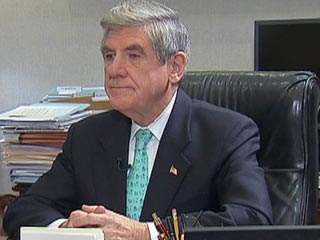 Just a heads-up for those of you who didn't notice it.

Earlier this week the U.S. Senate dealt with a defense bill that the Democrats had stuffed with all kinds of very expensive, controversial, non-defense nonsense. The Dems' thinking was that Republicans would have to go along with it or face nasty commercials at election time which would portray Republicans as voting "against the troops."

It's typical Democrat politics. Shovel in the pork and other pet projects that would be unpopular with the majority of Americans if they had to stand on their own. And then lie through your teeth about just why the opposition voted against the Trojan Horse bill.

But there's a new mood in the country. So new and bold and energetic that even the G.O.P. is catching on. And this time, Republicans refused to play the patsy. They fought back. Using the Senate rules the Democrats themselves created, Republicans used the filibuster to force Democrats to either amend the bill (most importantly, to drop language that would have required hospitals on U.S. military bases to kill preborn kids through abortion) or keep the bill from coming to the Senate floor.

Shamefully, the Dems wouldn't budge on the abortion plank. But they fell just short in the vote and the pro-abortion "defense bill" remains stalled.

And Ben Nelson of Nebraska, that fellow who so often boasts of his pro-life convictions?

He voted with his party. And, though he will try and present his action as merely a procedural vote in favor of open debate, it will be rightly marked by pro-life organizations who know the whole story as a vote for abortion.

P.S. In case you want to let Senator Nelson know you won't forget it, contact his office here or through any of these three offices: