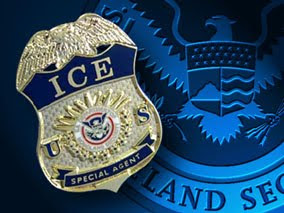 Yes, the MSM has finally "discovered" one of the most remarkable, most newsworthy stories of the year, that of a government employees union (the one representing the U.S. Immigration and Customs Enforcement) dramatically protesting the ineptitude and corruption of the Obama administration.

But even though they finally got to the story, the Washington Post managed to hem and haw, spit and spin, overlook and overcook the whole issue. It's a lousy story which omits entirely the main features of the controversy, a story written by Andrew Becker which tries to cover for the Obama administration's monumental failures by ignoring facts, accepting excuses and presenting the matter as a tempest in a bureaucratic teapot.

Had I turned in such a story when I was a freshman, reporting for the Trinidad State Junior College paper (fall of '69) -- a story that was poorly written, which altogether missed the salient points, and which was 3 weeks late to boot, I would have been dropped from the program.

Would that such a fate befall Becker, let alone the editors who let it be published.

But since that's not going to happen -- and since the MSM will continue to ignore this devastating story -- I suggest you check out this Vital Signs post from August 10th ("Obama Administration Is Cold as ICE") and that those of you on Facebook make a "Friend" status with Stand With Arizona (and Against Illegal Immigration).

Accurate information yields power -- and we need to empower voters come November to start reclaiming our country.
Posted by DH at 9:53 AM