Zuckerman Writes of "The Most Fiscally Irresponsible Government in U.S. History." 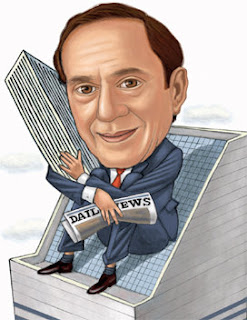 Mort Zuckerman is at it again.

And the "it" in question is bashing the Obama administration. Zuckerman does so in a compelling essay written for U.S. News & World (the magazine of which he is the chairman and editor in chief) which has the ominous title, "The Most Fiscally Irresponsible Government in U.S. History."

Pretty strong, huh? Particularly when you're reminded that Mort Zuckerman isn't speaking from the conservative side of the aisle.

No, as the editor of the U.S. News & World Report and publisher of the New York Daily News, Zuckerman has a long history of supporting Democrats. And he was once a strong supporter of Barack Obama. Zuckerman embraced Obama's promises of hope, positive change, non-partisanship, unity, transparency, fiscal responsibility, and restoring America's image in the eyes of the world. But Mort Zuckerman went further still. He went out on the limb for Obama, consistently and energetically promoting Obama's candidacy. His newspaper endorsed him.

But then Obama took office.

And, like so many others, Mort Zuckerman began to see signs that Obama was an illusion. And as Obama's first year in office wore on, the president's arrogance, incompetence, secrecy, indifference (if not disdain) towards Israel, rabid devotion to leftist ideology over practical concerns, and several other things made Zuckerman turn.

Zuckerman's first shot across the bow was an essay published last January, "He's Done Everything Wrong." Then there was another major salvo in June, "World Sees Obama as Incompetent and Amateur."

And now this doozy, "The Most Fiscally Irresponsible Government in U.S. History."

Perhaps this explains why President Obama plays so much golf and takes so many vacations. For when as influential a MSM journalist as Mort Zuckerman turns his guns on you, especially when that influence helped immeasurably to get you elected, escapism becomes very attractive indeed.
Posted by DH at 10:59 AM