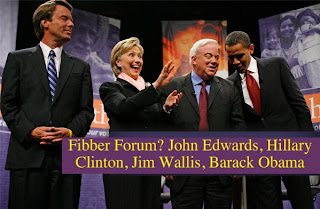 There is an old saying that politics make strange bedfellows. A great example of this is seen in the union of a George Soros, Jewish born billionaire who collaborated with the Nazis and was convicted of insider trading, funding the organization of Jim Wallis: Christian writer and political activist, founder and editor of Sojourners magazine, leader of the Progressive evangelical movement, Obama adviser and advocate for "social justice."

Sammy from The Lid blog goes on to review the time line of this important story. 1) Marvin Olasky blows the whistle on Jim Wallis, showing that the liberal religionist has been getting big money from Soros since 2004. 2) Wallis mocked Olasky and brazenly lied about the huge Soros donations, going so as to claim "we don't receive money from George Soros." 3) Tax returns from Wallis' organization were made public, revealing the millions Soros had given and marking Wallis as a fibber extraordinaire. 4) Caught red-handed (ignore the pun), Wallis could not nothing else but admit his lie -- kinda'.

Here's how he tried to spin it.

Recently, I participated in an interview about the future of Evangelicalism. The interviewer asked about a blog post in which an author made accusations about Sojourners' funding. I should have declined to comment until I was able to review the blog post in question and consulted with our staff on the details of our funding over the past several years. Instead, I answered in the spirit of the accusation and did not recall the details of our funding over the decade in question. The spirit of the accusation was that Sojourners is beholden to funders on the political left, which is false. The allegation concerned three grants received over 10 years from the Open Society Institute that made up the tiniest fraction of Sojourners' funding during that decade -- so small that I hadn't remembered them. Sojourners doesn't belong to the political left or right. Sojourners receives funding from individuals and organizations across a broad spectrum who are committed to our mission of "biblical social justice."

To which Sammy responds,

Holy Cow, Sojourners must raise lots of money to consider over $7 million from one person a "tiniest fraction." Or maybe Wallis is suffering from some sort of memory loss because the group's total revenue in 2008 for example, was only $4.6 million...

Wallis has shown that he is a liar and considering his false charges of Olasky lying, he is also someone who disregards the commandment about bearing false witness. There is nothing wrong with Wallis having his religious beliefs even if I disagree with them. What is wrong is that the Obama adviser misrepresents those beliefs and their political nature, even to the point of lying about them.
Posted by DH at 2:21 PM