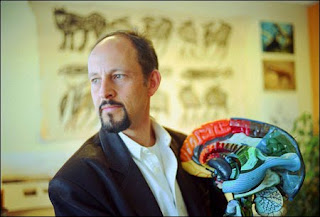 It took 3 years of investigating (Where's Mannix when you need him?), but Harvard University has finally decided that Professor Marc Hauser, an accepted expert in the field of moral evolution, did some "devolving" along the scale by committing “eight instances of scientific misconduct."

But can the professor really be blamed for faking the results of his experiments? After all, he insists that human moral codes derive from our neurological structure. No God. No spiritual conscience. It's all a matter of physiological wiring.

And Harvard has applauded him for these claims.

But, like is almost always the case with people who academically deny the presence of binding, universal moral standards, none of them are willing to really live like it.

Therefore, Harvard may laud Dr. Hauser's ethereal philosophy which denies moral standards but, by golly, when the school is shamed because Hauser gets caught in “problems involving data acquisition, data analysis, data retention, and the reporting of research methodologies and results,” they have no problem in bringing down the gavel.

Hauser himself fails to live up to his philosophy. For when Harvard officials finally nail him for cheating, he doesn't spit in their face and proudly repeat that there is no scientific basis for such outdated notions as right or wrong, cheating or fair play.

No, the intellectual fraud hangs his head and apologizes.

Welcome back to the real world, Doc.