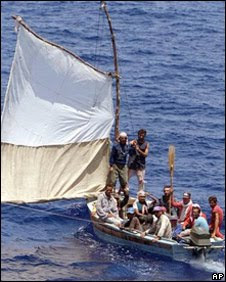 The United States government absolutely refuses to act against the flood of illegal aliens which pours across the Mexican border every day.

But they find time, resources and dedication to catching and returning illegal aliens to Communist Cuba at every opportunity. This despite the proven willingness of Cuban refugees to obtain legal status in the U.S. as soon as possible along with a desire to work hard and become productive citizens of their adopted country.

And this despite the cruel fate which awaits many of those who have made the dramatic and dangerous flight from the oppressive, unjust regime which tyrannizes Cuba.

8 peaceful political dissidents have been imprisoned in recent days by Castro's police, three during a protest at the University of Havana and five others for attending a political meeting at a private home.

So why the selective attitude by the U.S. government? Why is it "hands off" when it comes to thousands of Mexican illegals, even those violent criminals attached to drug gangs, but very much "hands on" when it comes to dozens of Cubans desperately trying to escape a cruel and corrupt Communism?
Posted by DH at 11:59 AM